Following the November 2020 Presidential Election he analyzed the trends of voter registrations versus actual votes and discovered alarming anomalies in a number of counties, ones that defy typical historical trends. He has published reports by county and by state that indicate which counties’ vote counts align with the trend in voter registrations and which have small or large divergences.

Seth has been an advisor to Former Lt. General Michael Flynn and Federal Lawyer Sidney Powell.

In the following pages you will find maps and charts that flag each county as red, yellow or green, based on whether the 2020 vote totals aligned with the trends, or diverged in statistically unlikely ways: 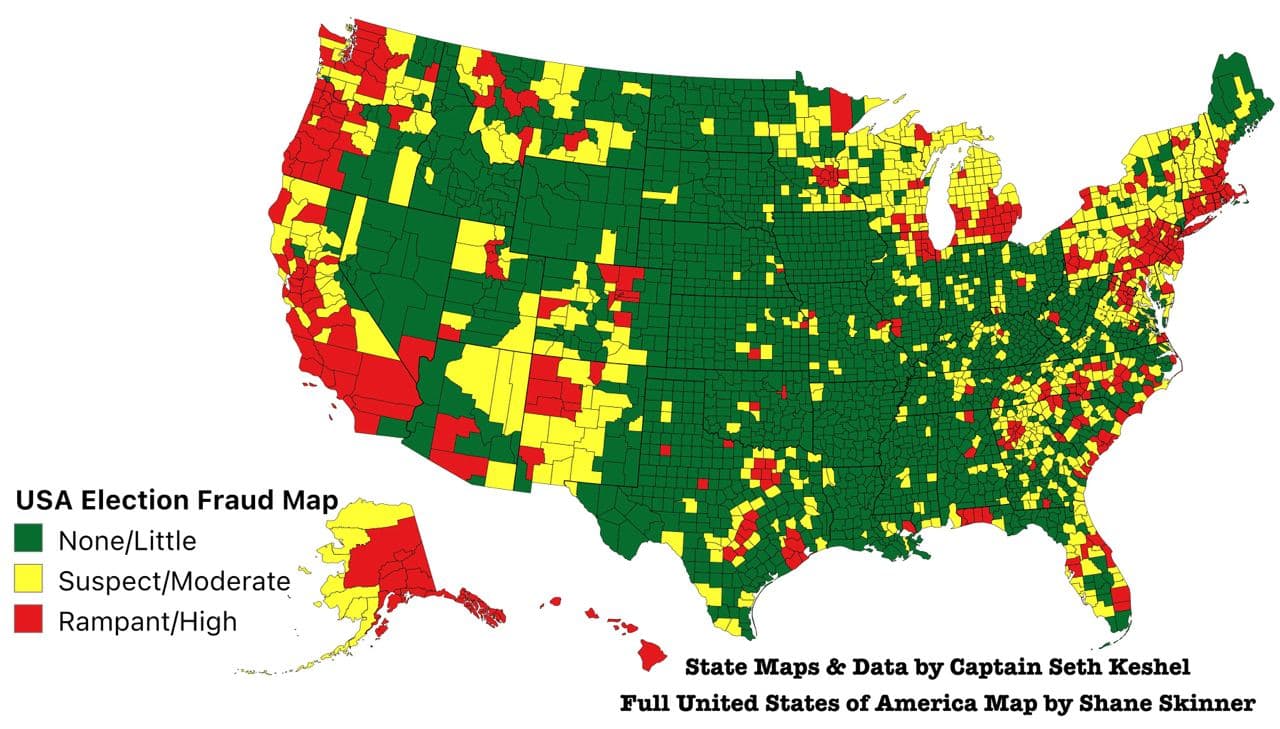 Where a large divergence is detected (red), this does not in itself prove fraud, but is a clear flag that the numbers should be investigated further.

Likewise, just because something is green doesn’t mean there are no issues with the county. The analysis considers trends, and Seth considers it “bulletproof” when he has access to party registration numbers. If a county follows the same trends as the past years and current numbers suggest, it goes as green. Audits of green counties might be considered lower priority.

Click a column heading to sort by that column.

The table above shows the official vote counts, plus the estimated number of excess Biden votes — this is the number of votes that are oddly above what the trends would suggest. These are based on trend analysis in the modern political era, considering population growth/decline, recent voter history, and registration information, including registration by party.

Seth explains that his estimates are always lenient, and do not account for cyber-attacks that flip votes more subtly in ways that avoid statistical detection.

Here is Seth’s graphic showing, in his opinion, the Top 100 counties we must secure Full Forensic Audits in in order to trust or restore the integrity of our election system:

This was tough to narrow down from 132, so a few had to be kicked out.

In Red and Blue categories, he did not choose unrealistic targets (like Cook or Los Angeles Counties, which would be very difficult to audit).

What makes this work accurate?

The polls are not accurate. Anybody that understands anything about analytics realizes that polls suffer from something called “social desirability bias”, where people don’t answer truthfully about which candidate they support or which party they support, which is how you end up with these 43-39 polls with 18 percent undecided. It doesn’t tell you anything. And they’re also made in some ways to suppress turnout, usually of conservatives.

“Polling is generally not an accurate thing it’s been that way for quite some time, but trend analysis is something that goes back decades as far back as these records are available, we’re talking about party registration data. It’s very telling in places like Florida, North Carolina, and Pennsylvania. That’s the most accurate predictor there is. And I was able to use data like that, including understanding dynamic shifts and trends to predict the 2016 election perfectly including, Pennsylvania, Michigan, and Wisconsin. And the data line over the same exact fashion this year was huge Republican expansion and gains in places like Florida, North Carolina, and Pennsylvania. So all the data suggests that these same states [were] turning more Republican. In Georgia, of course, we had a lot of issues on election day. But trend analysis is accurate, it’s plugged into real time, and it identifies behavior, registration data and population.”

General Flynn and Seth Keshel collaborated on an article in The Western Journal:

10 Indisputable Facts on the 2020 Election That Argue for Audits

He calls it “a no nonsense, cold, hard look at facts, trends, and indicators going as far back as 1892”.

It’s not that we’re trying to scream a certain outcome right now, it’s that we’re wondering “Why is there no investigation into this? Why is nobody asking these questions?”

In addition to the state-specific videos shown in the list above, these other videos refer to the US election in general:

Seth lists upcoming events and appearances on his website, here.

Following Seth’s trend analysis work, our independent team has dived further into the data and surfaced numerous irregularities. If you’re interested in learning more about Seth’s process and what else we’ve uncovered, see the following series of articles:

In most states, the certified election results and voter registration statistics are available from the Secretary of State or State Board of Elections. Check their website for details.

The detailed historical spreadsheets that Seth sometimes uses appear to be the ones from USElectionAtlas.org, although we have not officially confirmed this. On that website, the detailed data in CSV format is purchasable for a fee, while some aspects are browsable on the website.

Highly respected Army intelligence captain, Seth Keshel, has just released his Report on National Fraud Numbers with respect to the 2020 Presidential Election. I don’t personally know Captain Keshel, but these numbers are overwhelming, election-changing, and according to Keshel, could be even bigger in that they do not account for cyber-flipping of votes. They show I won the election—by A LOT! Now watch the Democrats coalesce, defame, threaten, investigate, jail people, and do whatever they have to do to keep the truth from surfacing, and let the Biden Administration continue to get away with destroying our Country. The irregularities and outright fraud of this election are an open wound to the United States of America. Something must be done—immediately!”

ElectionFraud20.org is not directly affiliated with Seth Keshel. We found his reports insightful, and have republished them online to make them accessible to a wider audience.

For the latest reports and updates from Seth, find him on Telegram:

Comments have been disabled for the time being as the discussion was not proving constructive, and we currently lack the resources to moderate it effectively. Feel free to send feedback via Telegram or Twitter.