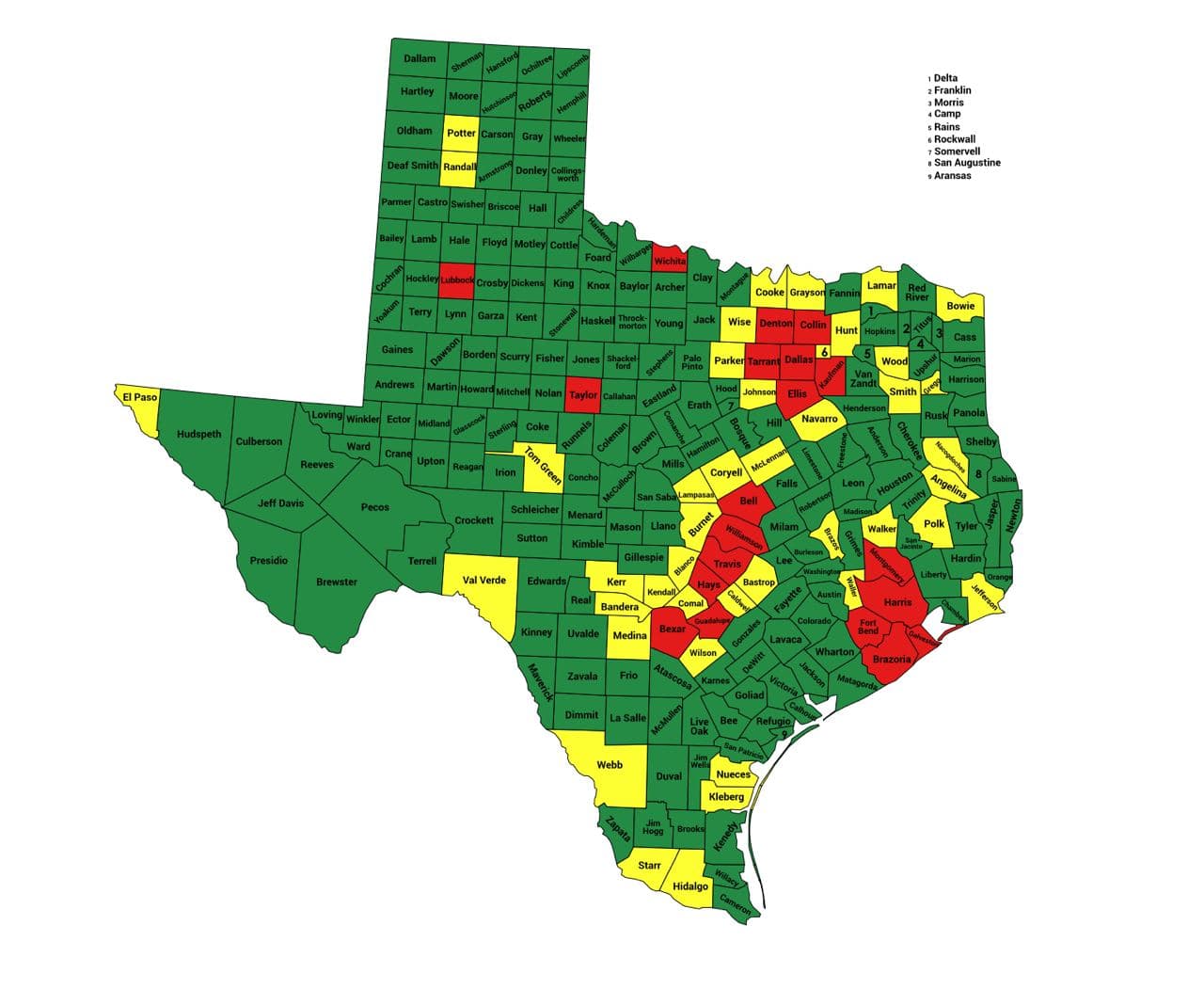 Estimating 675k excess votes for Biden, conservatively estimated. This would still give him a record high Democrat vote gain, as he was up 1.38 million from Clinton, with Trump also up at a record number 1.21 million. Counties over 50k listed in spreadsheet screenshot.

Since there is no party registration data available, my estimate is based on the 20-year pattern plus political trend. Trump trended Hispanic Texas heavily Republican, but somehow “lost” Tarrant County and lost big margins in suburbs despite huge ~30% gains or more in all of them. Democrat activity is obvious, many suburbs over 60% growth, huge urbans over 40%.

Estimates of Excess Votes by County

Based on Population Trends and 20-year history, and GOP growth correlation:

The following chart displays how in 12 Texas counties that voted Republican in 2016, Trump made large gains in votes of between 16 and 41% over the previous election, and yet Biden somehow swept in and increased his overall votes by a whopping 42 to 74% in a single election cycle, flipping these 12 to blue. Does this seem realistic? 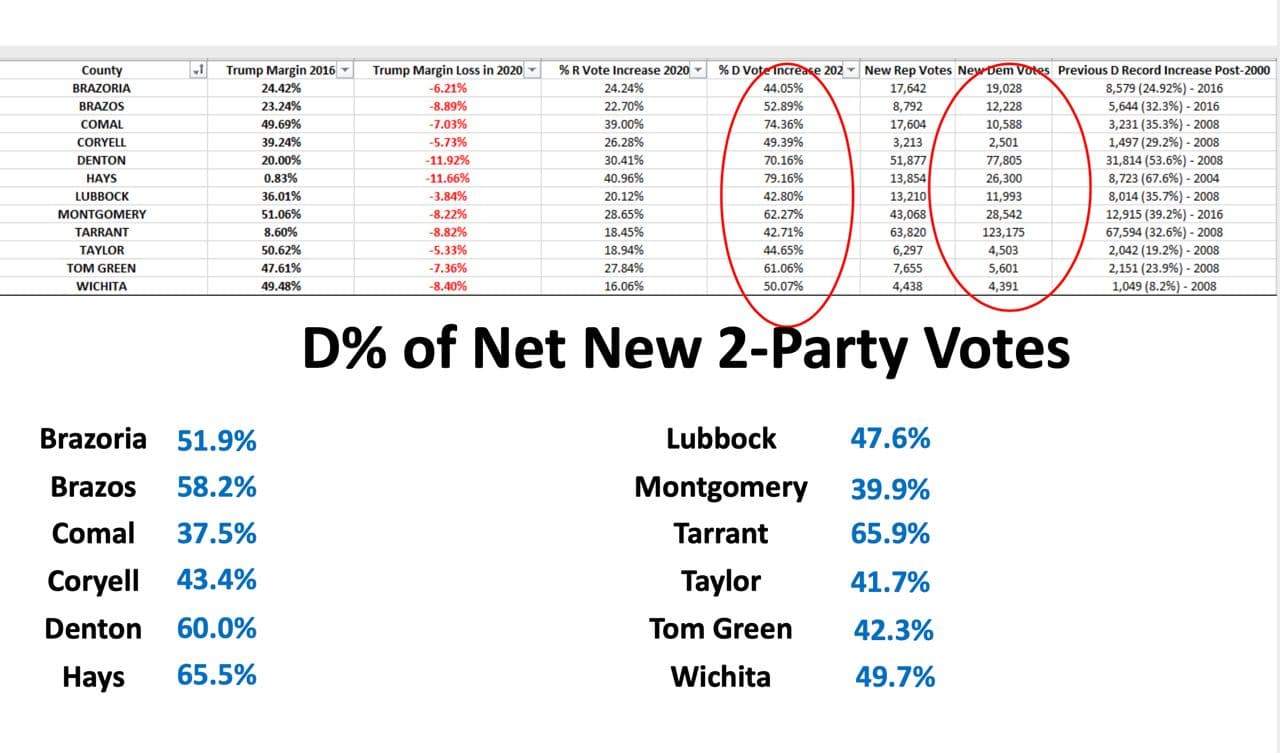 Many months later, Seth’s estimates on excess votes matched almost exactly with preliminary results from an election audit in Texas. 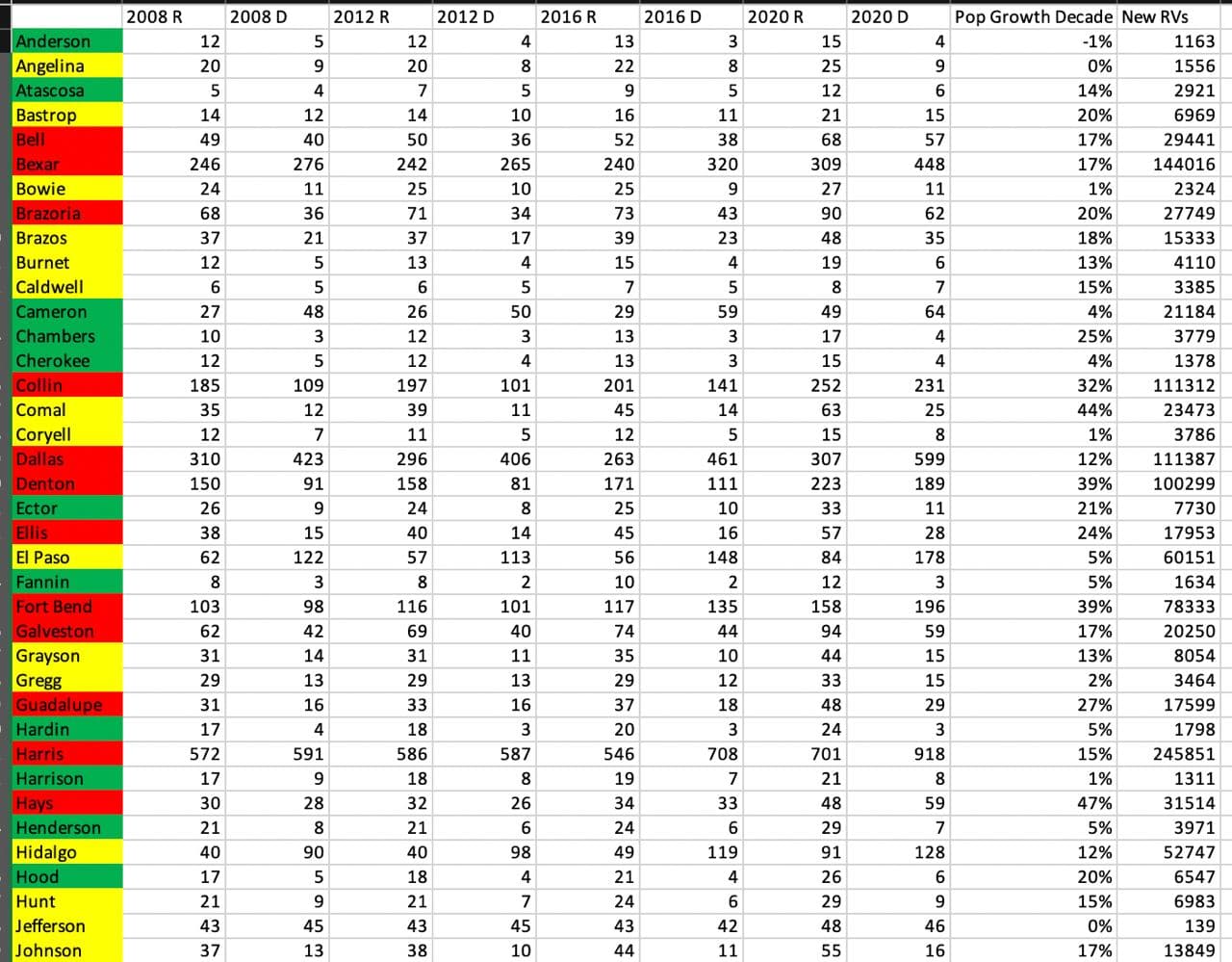 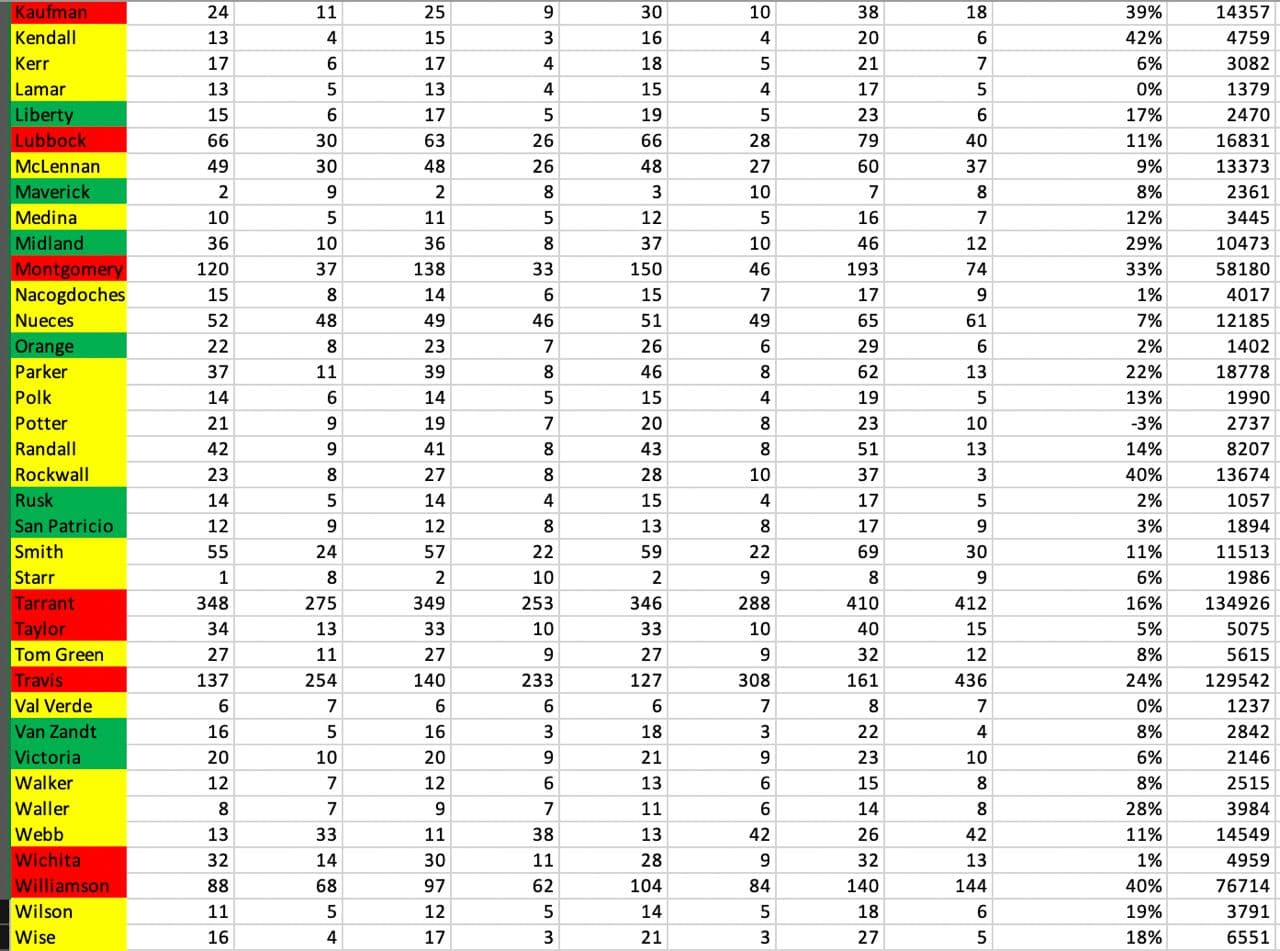 The following map shows the party leanings of each Texas county, first from the “official” certified results: 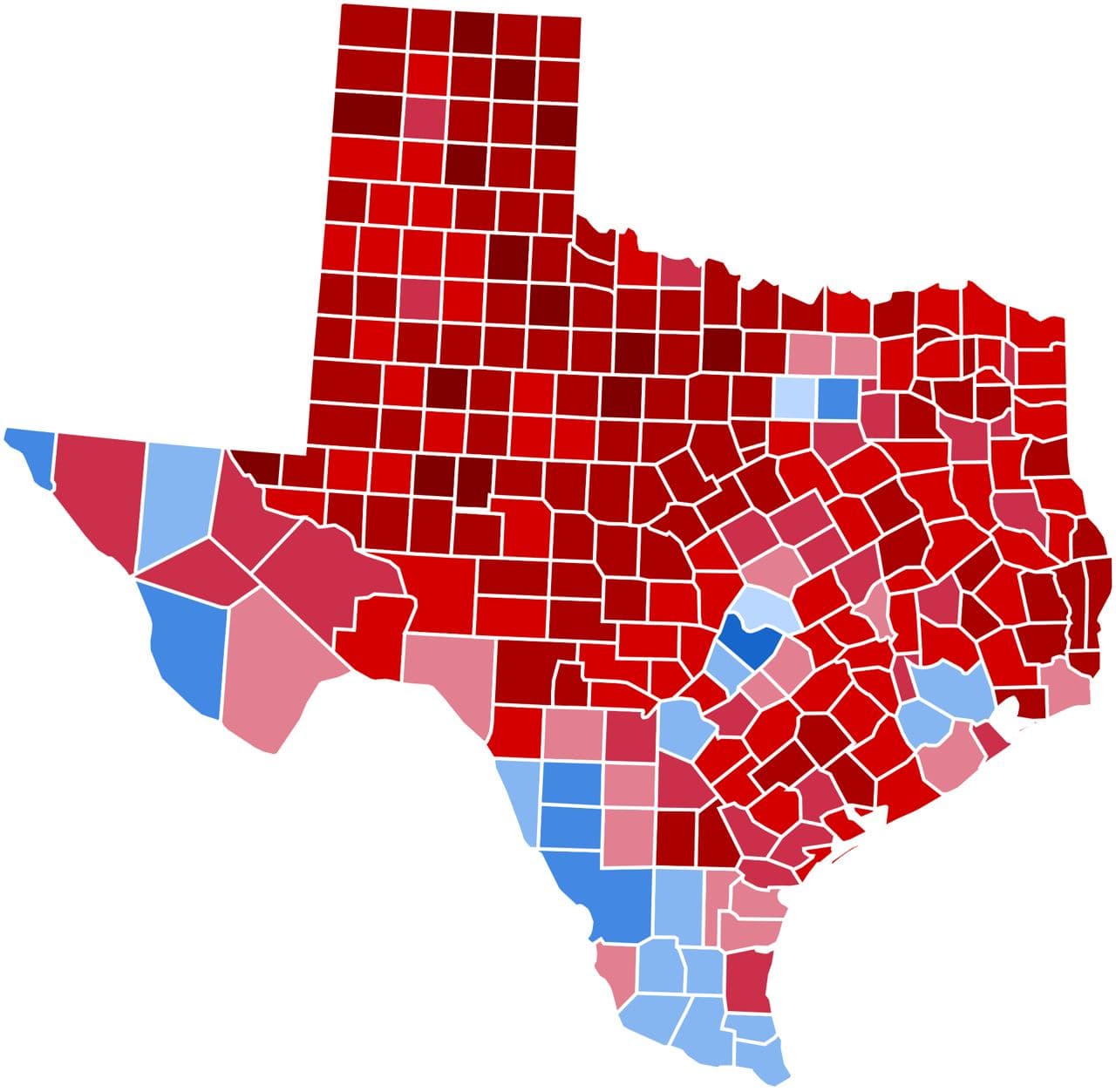 And now adjusted with Seth’s analysis and heat map: 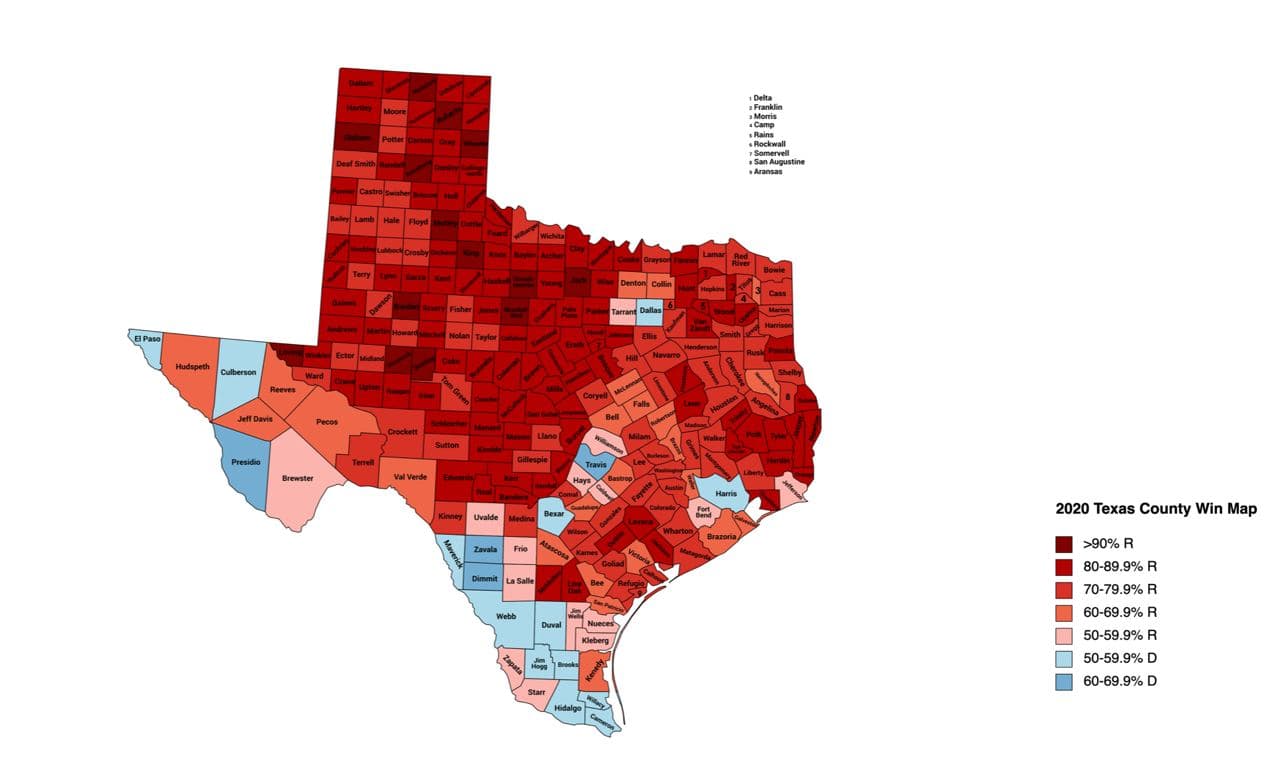 Seth has listed Texas’s Bexar, Collin, Dallas, Denton, Harris, Tarrant, and Travis counties as being among the Nation’s Top 100 Worst Counties in terms of abnormal trends during the 2020 election.

Here is the complete presentation from July 29, 2021 in Dallas/Fort Worth. National focus followed by Texas focus, followed by action items for believers. 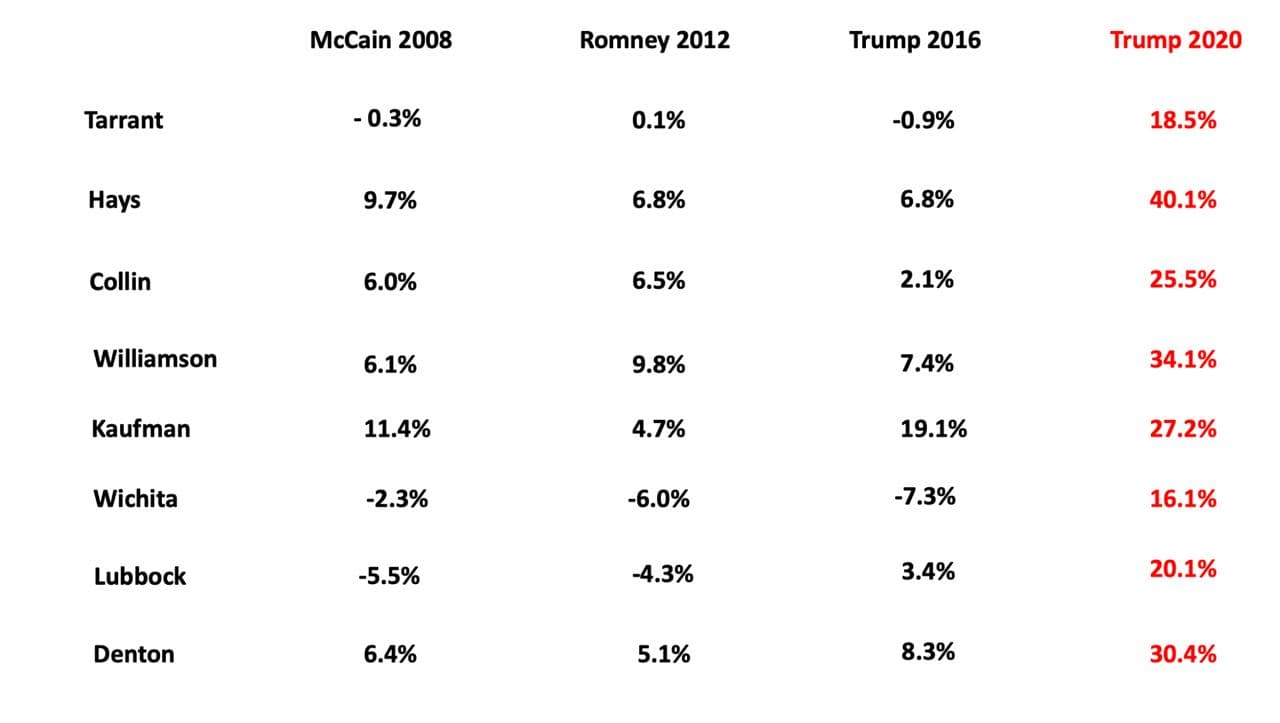 I enjoyed this slide the other day - I hadn’t made it until I was thinking of a more effective way to present Trump’s Texas performance.

Everyone knows about the trend with the Hispanic working class, with El Paso, West Texas, South Texas all trending heavily Republican, some counties more than 30%.

As an analyst, validity must be given to the final outcome - if real, then a 5.6% statewide margin and the closest popular vote finish in 24 years has to come from somewhere.

The TX GOP has been upheld by the suburban counties being heavily Republican. So did Trump lose the white vote? THIS IS PERCENTAGE OF VOTES GAINED OVER PREVIOUS ELECTION.

Some people asked for more clarity on this forwarded post/graphic. Happy to oblige.

With Trump’s known improvements with Hispanics in TX, including in major metros, the only possible way for the margin to tighten by 3.5% from 2016, and to have the popular vote win shrink by 200,000, is to get clobbered in the suburbs.

This graphic shows GOP nominee vote growth % from previous election. RINOs McCain and Romney are either down, flat, or modestly gaining in population boom counties in 2008-12 and Trump had a third party throwaway/Cruz grudge problem in 2016.

Look at the final column to see the Trump % vote gain and see how impossible it is for Democrats to eat up so much ground in the suburbs.

They have been large for a long time, and have been growing for decades, with no sudden Democrat boom to counter an historic GOP vote gain boom.

When the Presidential Election is the Odd One Out

Here is a comparison of 27 election races in Tarrant County, Texas. When every other election swung to Republicans, how likely is it that the 2020 Presidential election should be the only one to turn blue? 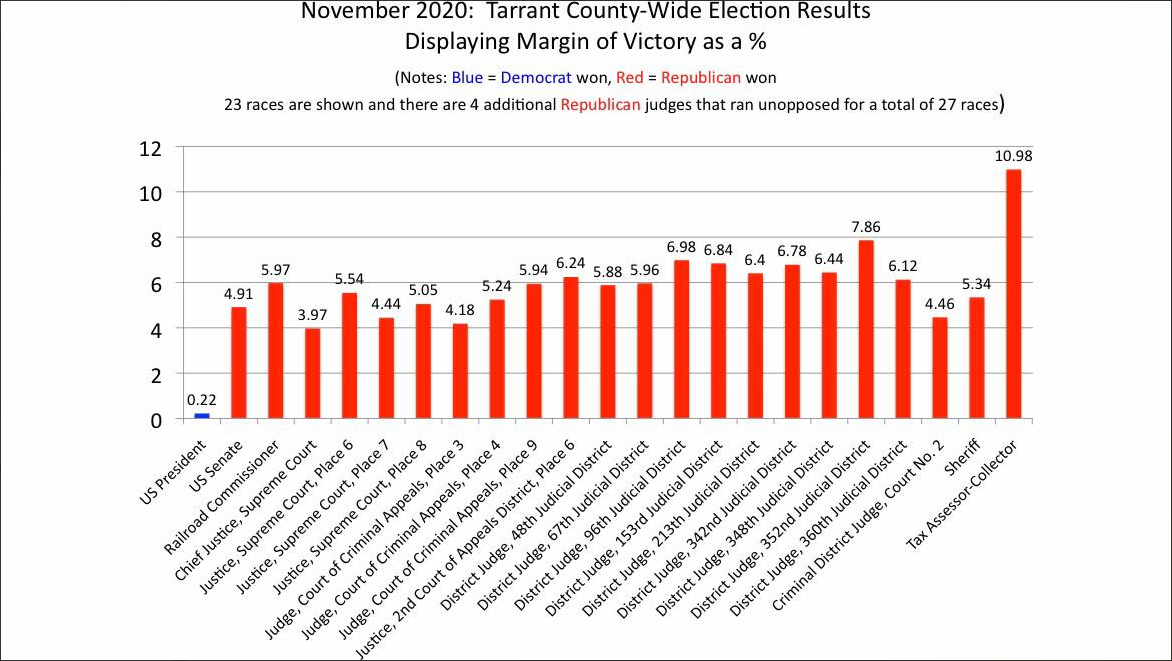 Our team here at ElectionFraud20.org has also analyzed some additional stats for Williamson County, being discussed in our Gitlab discussion area:

Seth calls it the biggest layup in the state for spotting excess Biden votes, and explains why with 32 years of information.

Why Are Audits So Important In Texas?

He also provided an update on the so-called “full forensic audits” in Dallas, Harris, Collin and Tarrant Counties. According to Seth “those audits don’t ‘cut the mustard’ … Don’t get too excited about them.” He also announces that he’s decided not to run for office in Texas:

Here’s the link to the OAN interview with Steve Toth that Seth referred to in the above video.

Seth’s original prediction of 675,000 excess votes was further validated in Jan 2022 with the release of preliminary audit findings in Texas: 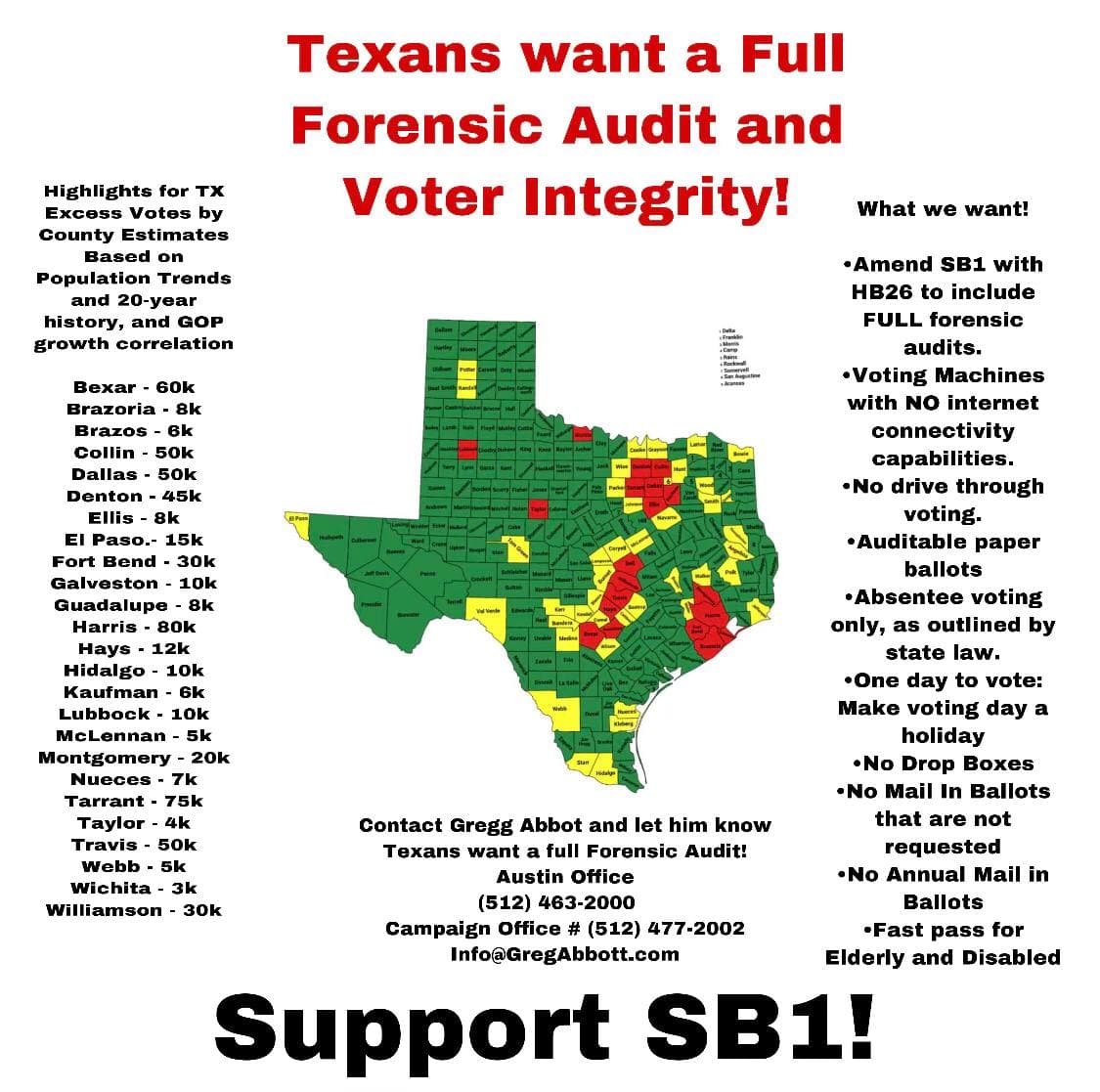 We aim to publish links to both the raw election data and voter registration data for Texas so that citizens and researchers can analyze this information for themselves.

According to Seth (here), he has been in contact with Former Senator and Governor-candidate Don Huffines and Republican Party Chairman Allen West who have been willing to discuss Seth’s analysis and calls for audits.

Governor Greg Abbott has so far been unresponsive.

To join the grassroots efforts in pursuing election integrity and audits of the 2020 election in Texas, you can join the following groups on Telegram: