📃 This article is Part 6 in a series on Identifying Electoral Fraud Using Trend Analysis.

In this article we will analyse every county for which we have registration data, to see if the voting and registration trends align.

We’ll group counties into categories based on whether they trended “normally” or “abnormally”, and incorporate this into the “winning ranges” table we developed in Part 4.

In Part 5 we gathered the party registration numbers for most counties in the US, as well as the votes cast for each party over the last 5 elections. We can now use this data to find out if the voting trends align with the registration trends.

Depending on the results we can group the counties into 4 different categories (or buckets):

We’ll call this categorization the “Registration and Voting Trend”, or “RVT” for short.

► Show how to calculate the category in Excel

If you’re using spreadsheet software like Excel, you can use a formula to determine which category a county falls into.

You’ll first need to have separate columns for each of these values:

And then in another column, use a formula like this, replacing all three-letter codes with the actual cell references, like A1, B2, C3, etc.:

Let’s look at the data from Pennsylvania as an example. Here are the most populated counties in Pennsylvania, with their corresponding RVT categories for 2020 and 2016, shown in the last two columns: 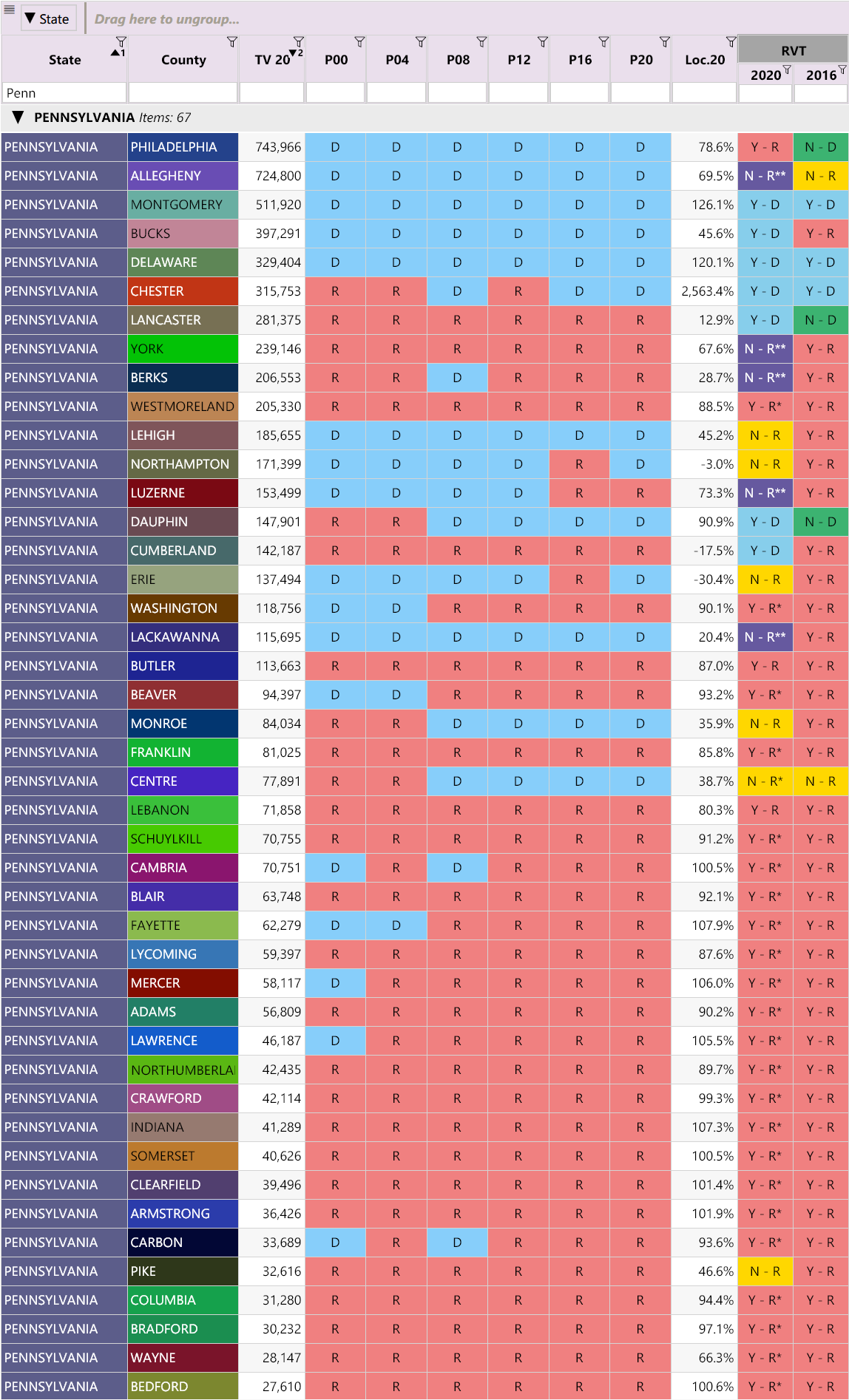 To show an example of how we arrived at this categorization, take a look at the historical results for Philadelphia and Allegheny counties: 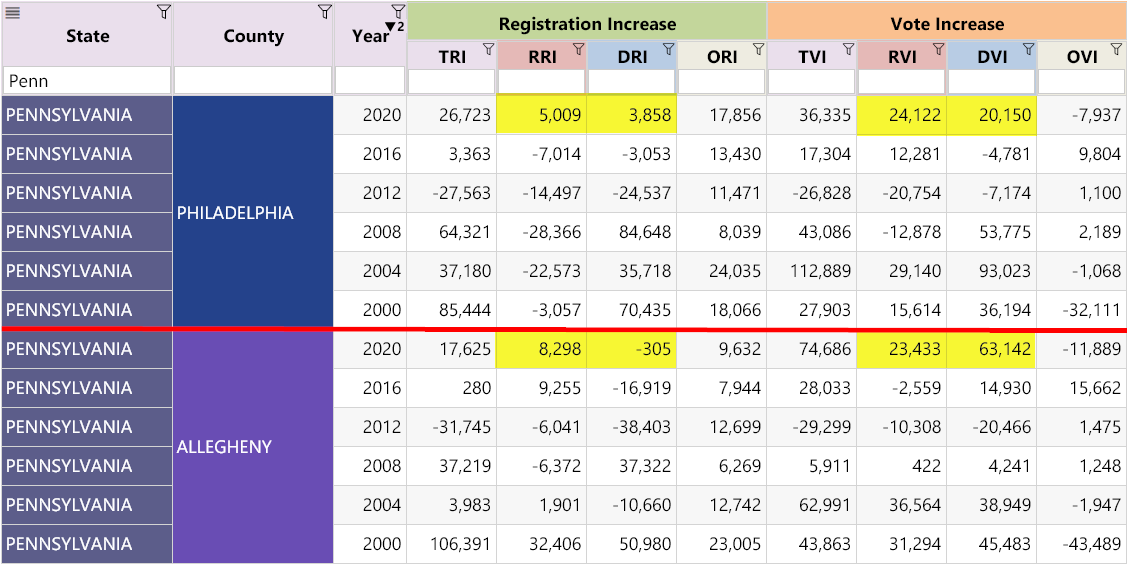 For Allegheny County, the RRI in 2020 is greater than the DRI, yet the RVI is lower than the DVI, so the RVT is “N-R”. In other words the registration increase favored the Republican party, but the vote increase favored the Democrat party. As the numbers show, the difference is significant and highly suspicious (especially since the DRI was negative and yet the DVI was a very large positive number, nearly 15 times larger than the 2008 DVI value achieved by Obama!).

💡 TIP:
For any given county:

The stars are meant to emphasize that a county is highly suspicious and requires further investigations.

The more stars a county has, the more suspicious it is.

Keep an eye out for the trend bucking counties with a “N-R” category, with possibly one or two stars. (i.e. having a “N-R” category is already very suspicious. Having a star just makes it much worse.)

Many “N-R” counties also have uncharacteristically low Loc.20 values. This is important, because these are two independent analyses that have corroborating results. In other words, it reinforces the validity of the “Winning-ranges” analysis and the importance of the Loc.20 value.

Which States Have The Most Abnormal Trends?

Now let’s categorize all counties across the US where we have access to party registration information. We can now filter the categories to show just the counties that bucked the trend — that is, counties with a RVT of “N-R” or “N-D”.

View all trend-bucking counties, by state

There are several states that look very suspicious.

They are easy to identify because they have many counties with a “Y-R” category in 2016 but a “N-R” category in 2020. In other words, these are the states that had a shift towards higher numbers of Republican registrations and votes in 2016, but in 2020, despite a larger increase in Republican registrations, somehow ended up with more Democrat votes (!?).

Finally there are states that have a lot of “N-R” and “N-D” categories, which would suggest either one of two things (or both!):

This suggests there are over 6 times more counties which did not receive as many Republican votes as would be expected from the registration data, and they all happen to be in the most populated counties for their respective states. Coincidence? (Why are the smaller counties much better behaved than the largest ones?)

This can be clearly seen in the first image above for Pennsylvania. All the smaller counties have a “Y-R” value in 2016 and 2020, however the larger counties have more “N-R” values in 2020.

With so many counties bucking trends and setting new turnout records, combined with the reports of poor security and election mishandling, the results do look suspect. Statistics such as these can help identify which counties need a thorough inspection. We believe contacting voters directly (canvassing) combined with forensic audits (where necessary) is crucial to conclusively determining the validity of the election.

As you may have noticed, many states were missing from the RVT trend analysis. The reason is that many states don’t keep (or don’t share) registration records by party. When this is the case we can fall back on the Democrat Vote Increase (DVI) trends.