Absentee voting in Wisconsin is treated quite differently than other parts of the country. The law clearly states that “Results which do not comply with those regulations may not be included in the certified results of any election”, and yet, after an examination of ballots and envelopes:

3 million properly voted in the state of Wisconsin. More than 200,000 identified during this recount, did not, but those votes got counted, and our statute says they should not have been. That, in our view, is a taint on our election in Wisconsin.”

— James R. Troupis, testifying to US Senate Committee on Homeland Security and Governmental Affairs hearing, examining irregularities in the 2020 Election. 3 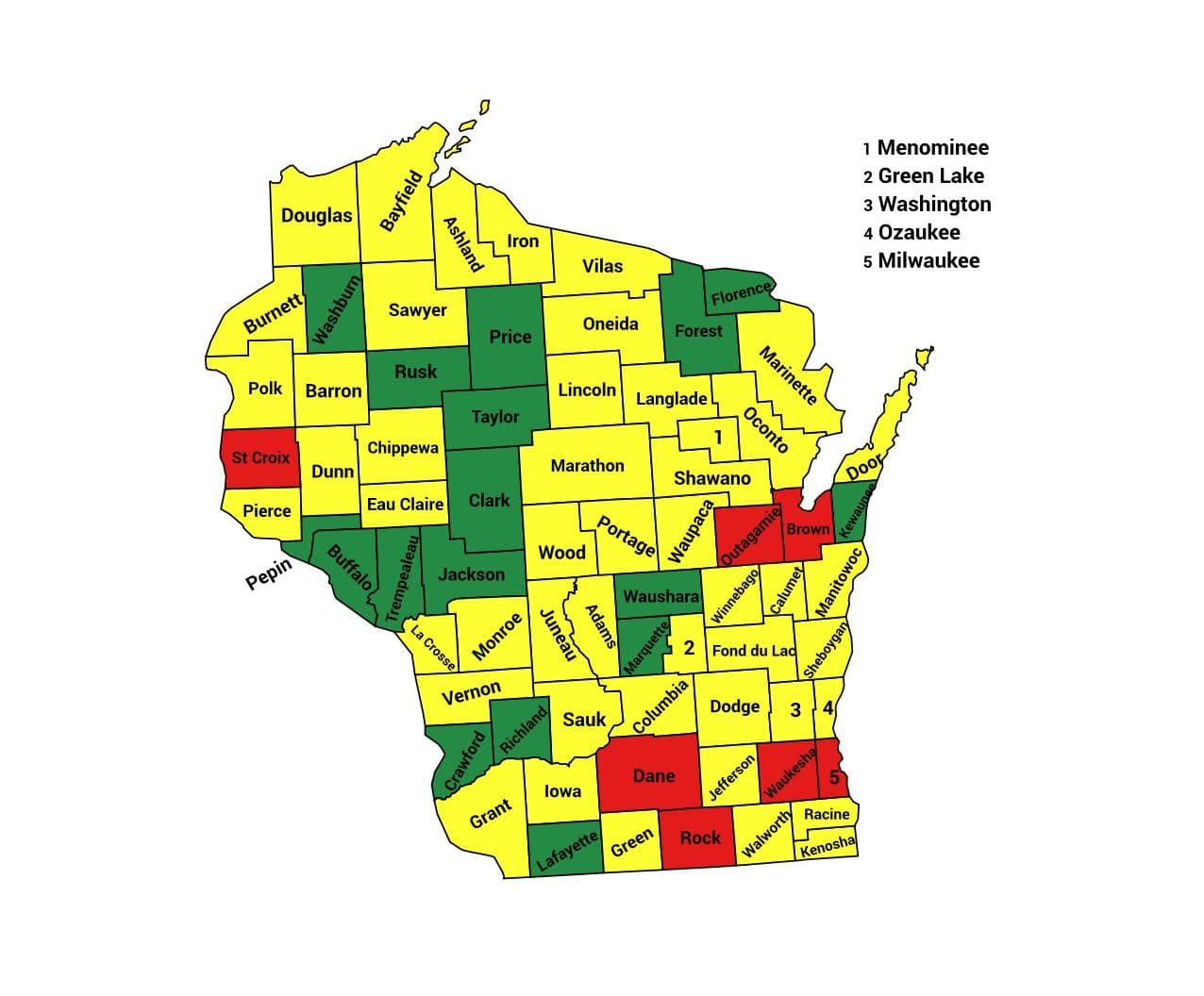 Seth estimates that there may be approximately 139,000 votes for Biden in excess of what Wisconsin registration trends would indicate — a possible indicator of fraud. Counties with the greatest number of excess votes deserve closer inspection.

Seth has listed Wisconsin’s Dane, Milwaukee, Rock, and Waukesha counties as being among the Nation’s Top 100 Worst Counties in terms of abnormal trends during the 2020 election.

Multiple reports 9 10 11 12 13 accuse charities supported by Facebook CEO Mark Zuckerberg and his wife of illegally influencing the 2020 presidential election in multiple states, including Wisconsin. Through their donations of $400 million into charities like The Center for Tech and Civic Life (CTCL), millions poured into the key swing states of Michigan 14, Pennsylvania, Arizona, Wisconsin, Georgia, Nevada, as well as Texas, North Carolina, and Virginia, in violation of federal law. 12

Here are the 6 largest CTCL grants in Wisconsin, and who won the county: 10

Arizona legislators are working to ban this practice in the state, and we hope that other states will follow suit.

A narrowly divided Wisconsin Supreme Court on Dec 14, 2020 rejected Trump’s lawsuit about an hour before the Electoral College cast Wisconsin’s 10 votes for Democratic presidential candidate Joe Biden. In the 4-3 ruling, the court’s three liberal justices were joined by Hagedorn, who said three of Trump’s four claims were filed too late and the other was without merit. 15

According to James R. Troupis’s testimony to the US Senate Committee, the Wisconsin Supreme Court was urged by Biden campaign not to address any substantive issues. As a result, Troupis reported that:

The [court’s] decision itself is premised not on an analysis of the law, nor the analysis of the claims, [but] an idea that we should not have a transparent system, that does not address these things. It’s a sad day, frankly, when the whole opposition doesn’t argue we’re wrong, it argues we shouldn’t be heard. That’s a strange thing in a state that’s so transparent as ours.”

— James R. Troupis, testifying to US Senate Committee on Homeland Security and Governmental Affairs hearing, examining irregularities in the 2020 Election. 3

Dane and Milwaukee Counties performed recounts at the request of the Trump campaign, involving recounting the ballots, mostly by hand, using a different team of people from those counting on election night. These were completed by Nov 29, 2020, and awarded an extra 87 votes to Trump and 132 to Biden. 16

Note that a recount does not tend to identify chain of custody issues and the alleged injection or manipulation of fraudulent ballots, such as those noted in the above sections.

In response Donald Trump tweeted that “The Wisconsin recount is not about finding mistakes in the count, it is about finding people who have voted illegally, and that case will be brought after the recount is over, on Monday or Tuesday. We have found many illegal votes. Stay tuned!”

Both the Wisconsin State Assembly and the State Senate commissioned election investigations.

Why are there three audits underway? Representative Timothy Ramthun explains in this Rumble video that the first two are not what the people are demanding.

The State Assembly commissioned Michael Gableman, former Supreme Court Justice, assigning him to be Special Counsel, which gives him more authority in carrying out investigations. Gableman attended both the Arizona Forensic Audit and Lindell’s Cyber Symposium, to learn and gather information. 17 His findings have not yet been released.

The Senate commissioned the Legislative Audit Bureau to perform an audit investigation, about which not much is publicly known. It’s expected to be finished around fall in 2021.

State Representative Janel Brandtjen (Republican), head of Wisconsin State Assembly’s Elections Committee travelled to Arizona in order to watch the forensic audit in Maricopa County and has led the push for similar forensic audits in Wisconsin.

Around Aug 6, 2021, she issued official subpoenas to two different counties, demanding that they turn over all ballots and voting equipment for the state to conduct a top-to-bottom cyber investigation into the results. 18 19 Earlier this year, the assembly committee voted to give Brandtjen’s committee both investigatory powers as well as the power to issue subpoenas, which she is now doing.

Legislators have been hearing from thousands of disgruntled constituents regarding their concerns with the November 2020 election. From outside money pouring into Democrat controlled communities, to individuals engaging in questionable activities; from improper guidance given to clerks from the Wisconsin Elections Commission, to clerks illegally prompting voters to declare themselves “indefinitely confined”. The list goes on and on.”

“I understand the Legislative Audit Bureau is conducting an audit, however, many constituents have raised objections to it due to the length of time it has taken and the lack of specifics, as it is open-ended.

“I sincerely welcome and applaud these efforts, however, the people of Wisconsin demand and deserve a transparently, full, cyber-forensic audit as described in the subpoenas submitted to both Milwaukee and Brown Counties. The clock is ticking as the 2022 elections will commence in just a matter of months.”

The state’s Elections Commission (a different department to The Campaigns and Elections Committee) has denied some of Brandtjen’s claims about voter registration databases and voter ID checks 20 21 , but their responses do not mention the other issues raised.

The two subpoenas were sent to:

Clerks for these counties must appear before the committee on Sept 7th, 2021 and they must turn over all the ballots, voter names and addresses, election equipment, tabulators, servers, etc.

It’s not clear whether these two counties will readily comply with the subpoenas or whether they will push back and challenge them in court, as happened in Arizona. Milwaukee County has not yet issued a response. Brown County is currently reviewing the subpoena.

While there has been a lot of support for her actions, Democrats have criticized the subpoenas, calling Ms Brandtjen “an enemy of our democratic system”. Minority Leader Gordon Hintz said of the forensic audit: “It really should be viewed as an attack on our country and an attack on our election system”. 19

Why would Democrats describe a forensic audit, done lawfully, as “an attack on our election system?”

Stay tuned as we update this page with major developments.

From Wisconsin, only Representative Tim Ramthun has so far signed the document.

We aim to publish links to both the raw election data and voter registration data for Wisconsin so that citizens and researchers can analyze this information for themselves.

Do you have more information about what happened in Wisconsin? Share in the comments below.