Dr. Douglas G. Frank is a 40-year modeler of pandemics and elections, a renowned scientist, and inventor who received his PhD in Electrochemistry at UC Santa Barbara. He has authored approximately sixty peer-reviewed scientific reports, including feature and cover articles in the leading scientific journals in the world (Science, Nature, Naturwissenschaften).

Using 2010 US Census data and updated 2019 American Community Survey data from the Census Bureau, Dr. Frank is able to predict not only the voter turnout by age, but voter registration by age. When Frank’s prediction is compared to the actual voter turnout and voter registration by age, it correlates to an unusually high level of accuracy. In the case of Missoula County, and most other of the 55 other counties in Montana, his prediction was correlative to 0.99. 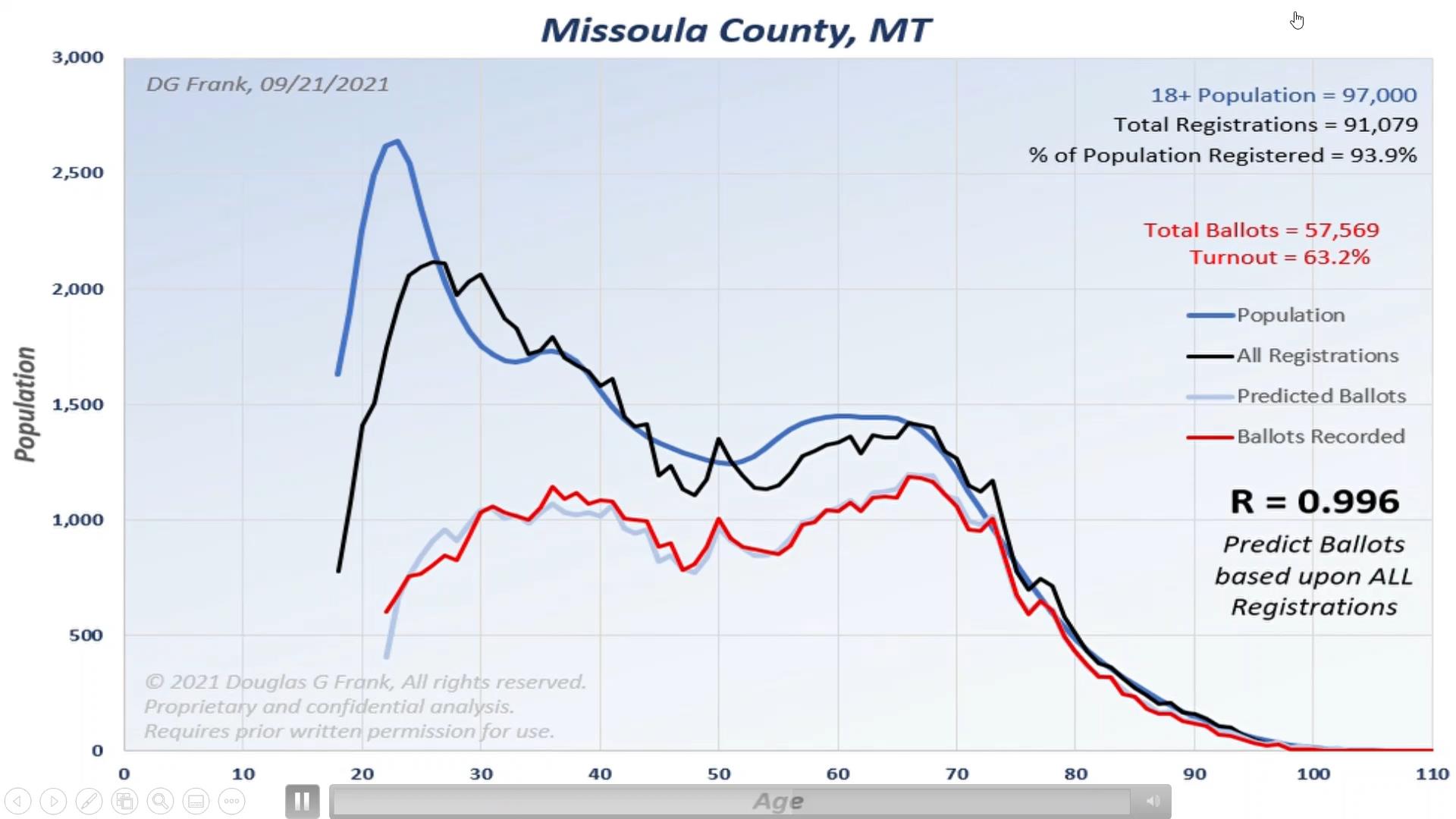 Notice how closely the red and light blue lines are in alignment.

Counties across Montana had more registered voters in certain age groups than eligible voters exist in the population, and in many cases in older cohorts, voter turnout was nearly 100% and sometimes exceeded the total eligible population.

More astonishingly, the same, exact algorithm (or “key” as Frank calls the mathematical formula) used in Missoula County could be applied to any other county in Montana (except for Petroleum, Treasure, and Wibaux counties) to predict their voter registration and turnout by age, too. See the detailed charts for all of Montana.

Dr. Frank has performed his analysis on at least 14 other states and has found the same disturbing pattern where he is able to predict the voter turnout rate for every age bracket in many counties based only US Census Bureau data.

The following chart shows an overview of each state and how “clean” or “dirty” their voter rolls and turnout numbers appear to be:

The following chart shows which states have the highest percentage of eligible voters (18 year-olds and above) actually registered to vote, with some states above 100%:

This chart shows the states with the highest percentage of registered voters who actually voted in Nov 2020: 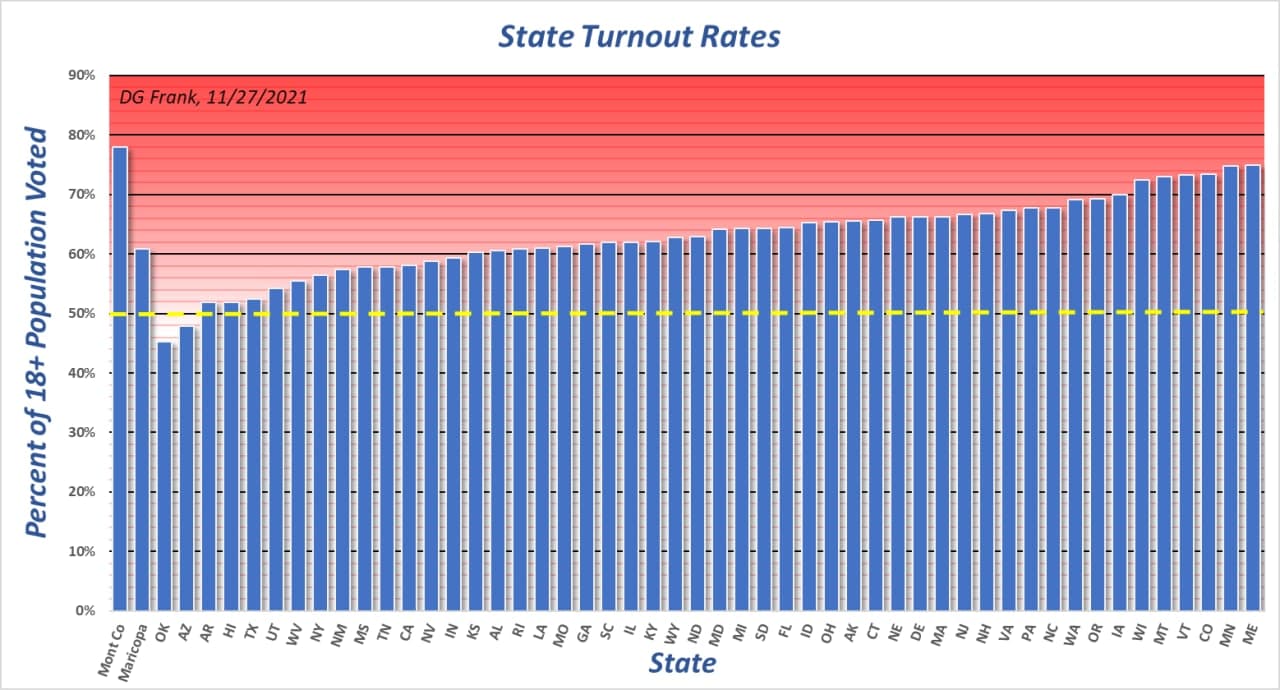 By combining the two charts together, we can see which states are really pushing these two strategies heavily: 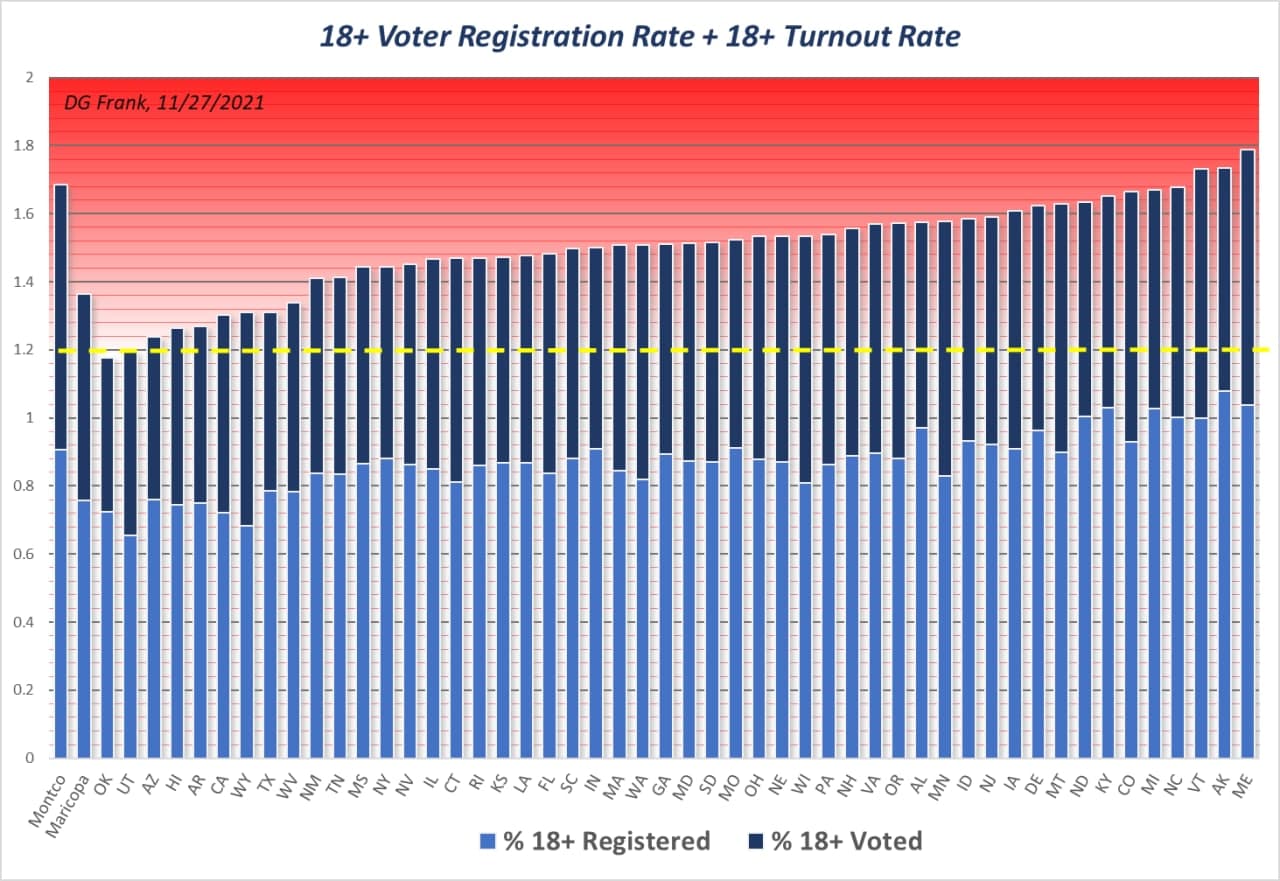 The simplest possible explanation of his findings is covered in this 3min video clip A Simple Metaphor:

A more detailed overview of Dr. Frank’s work can be seen in his 1-hour interview with Mike Lindell, Scientific Proof:

He also presented his findings at Lindell’s Cyber Symposium, Aug 10–12, 2021 (which we covered in another article here):

An independent researcher demonstrated Dr. Frank’s process and statistics and how he was able to replicate the findings. Watch the video here.

Dr. Douglas Frank publicly confirmed that he is contributing a significant amount of research and data into an upcoming Supreme Court case. In a video interview with Pete Santilli (from 21min mark) he gives more background to the case.

He also suggests that the much-discussed packet captures (PCAPs) that Mike Lindell has been in possession of were actually captured using government (CISA) infrastructure, which is why they were not able to be legally released to the public previously. But they will be included in this upcoming case on November 23.

The upcoming Supreme Court case needs Republican State Attorneys General to sign on as litigants. Let your state representatives know that you want them to support this action.

What are your thoughts on Dr. Frank’s analysis? Or have you found additional materials related to his work that would benefit others? Let us know in the comments below.