Most research into election fraud began in the six battleground or swing states, yet after numerous other states reported integrity issues the research has widened. We’re hoping to expand our coverage to every state in the US. The sections below outline what we know so far about Nebraska.

The Heritage Foundation’s Election Integrity Scorecard is an assessment of each state’s voting laws, written regulations and procedures. Nebraska was ranked equal 43rd out of 51.

View the full Scorecard for Nebraska 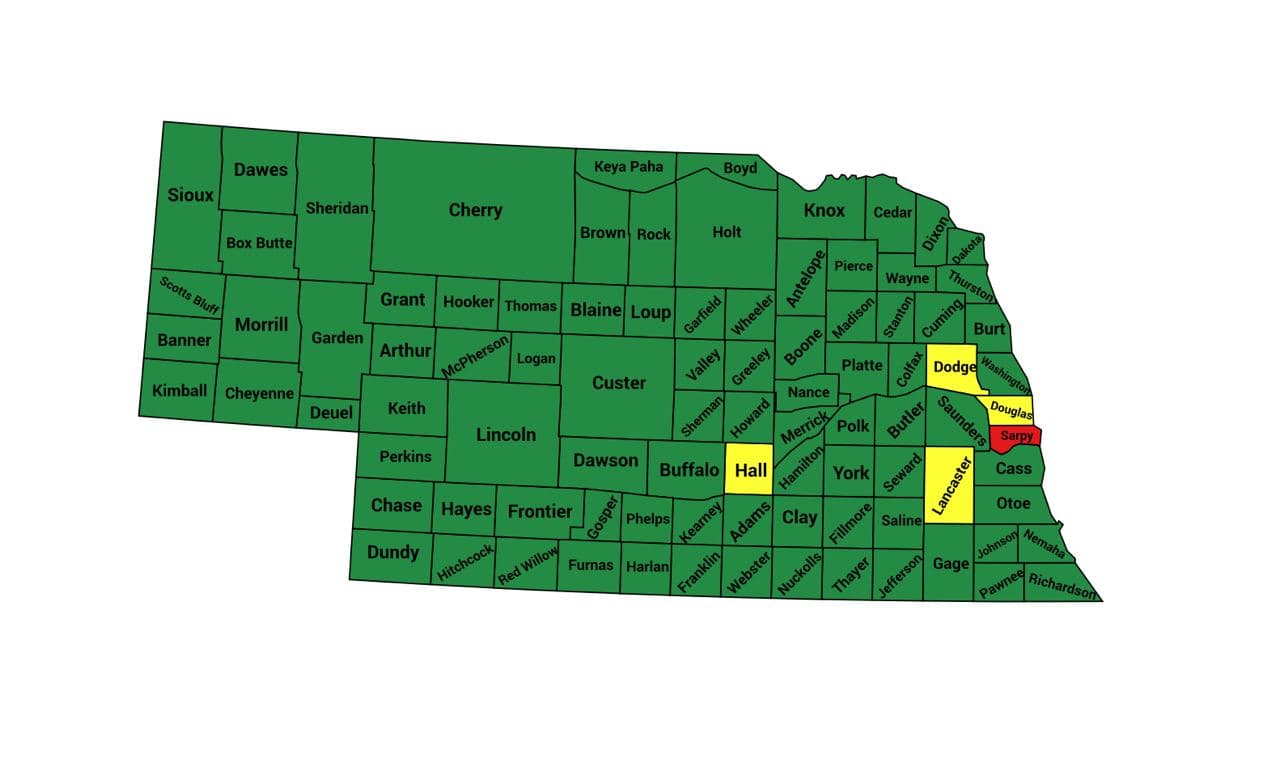 Seth estimates that there may be approximately 33,000 votes for Biden in excess of what Nebraska registration trends would indicate — a possible indicator of fraud. Counties with the greatest number of excess votes deserve closer inspection.

Seth has listed Nebraska’s Douglas and Sarpy counties as being among the Nation’s Top 100 Worst Counties in terms of abnormal trends during the 2020 election.

After the 2020 election, over 2,200 citizens connected via Telegram to share data and discuss reports from the election, forming the Nebraska Voter Accuracy Project.

The following 60min video presentation explains many of the findings to date, given by Larry Ortega, Dec 17, 2021:

The full 90min presentation including introductions is available here. Slides from the presentation can be downloaded here.

Highlights from the Presentation

Larry Ortega explains that there are numerous clear indications of fraud from the 2020 election — some are mathematical, but others are clear enough to see without a mathematical background. This appears to be an issue much wider than just Nebraska, however it likely included the cooperation of at least some people on the ground within the state.

The findings thus far include:

Further updates from The Nebraska Voter Accuracy Project can be found on their website, Telegram channel, Rumble video channel, or other social channels.

Here’s a small sample of residents that reported irregularities with mail-in ballots:

Prior to the 2020 election we received 3 ballots for Lindsey F. at our address. Lindsay is a daughter but has not lived at this address for more than 15 years. Additionally, Lindsay’s name changed to Lindsay S. Lindsay was 16 years of age when she last resided at our address and was NEVER A REGISTERED VOTER WHILE LIVING AT THIS ADDRESS. When we contacted Lindsay she said at no time did she request a mail in ballot. She further stated that she is a registered voter (Democrat) but has never been registered at our address, she also stated that she did not vote in the 2020 election.
— Cheree F.

Kristine S. does not live here and has not for 20 years.
— Charleen S.

My name is Justin T. I reside at [address redacted] with Ashley T. We each received 2 ballots with our names on them for each of us, then a week to a week and a half later we each received 2 more and then I think we received 1 more. We are both registered Republicans and have never requested any ballots.
— Justin T.

I spoke to Dennis G he said his father Harley G died 11 years before the election, his mother died 1 year 6 months before the election and they both received ballots in the Nov. 3, 2020 election. Their address is [redacted] then they were in assisted living!
— David D.

I did receive one ballot I requested from Fred Mytty’s office in Dodge County NE, for the Nov. 3rd 2020 Election, but I also received 3 other ballots from whoever, one of them came months after the 2020 Presidential Election. The additional 3 ballots that came were not on as heavy of paper.
— Debra

I received 4 ballots for the Nov. 3rd 2020 election. I do not know the person that’s name was listed on all 4 ballots. We are both registered Republicans and have not requested any ballots. We opened the ballots we received and then threw them away.
— Anne

Alarmingly, some counties across Nebraska had more registered voters in certain age groups than eligible voters exist in the population. Additionally, in many older age-groups, voter turnout was nearly 100% and sometimes exceeded the total eligible population.

The same, exact algorithm (or “key” as Frank calls the mathematical formula) used in one county could be applied to many other counties in Nebraska to predict their voter registration and turnout by age, too.

Dr Frank also found hundreds of errors in the voting records. The below charts compare the official election report (dated Dec 4th, 2020) with the voter rolls on Dec 4th for each county. In a properly run election there should be zero differences between the two records. But as you can see many hundreds of anomalies exist. 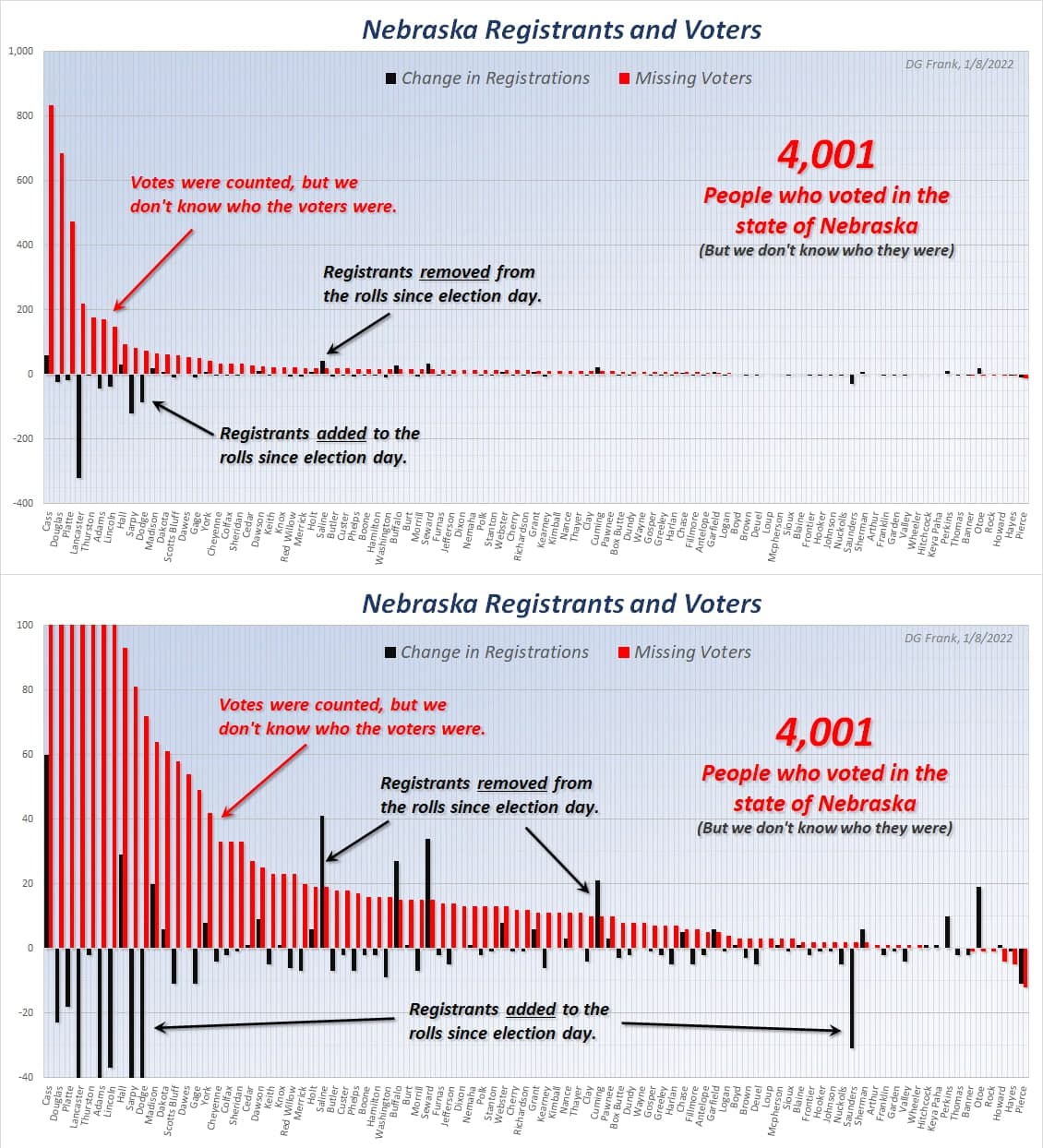 This second chart shows the same data but amplified by a factor of ten to see the differences more clearly.

The top ten worst counties on this chart were:

From Nebraska, only Representative Robert Clements has so far signed the document.

The US Congress Election Integrity Caucus — a group of 55 federal members working together on issues of election integrity — has no members from Nebraska.

To join the grassroots efforts in pursuing election integrity and audits of the 2020 election in Nebraska, you can join the following groups on Telegram:

We aim to publish links to both the raw election data and voter registration data for Nebraska so that citizens and researchers can analyze this information for themselves.

Beyond Nebraska, additional links of nationwide relevance are available on our Further Leads page.

Do you have more information about what happened in Nebraska? Share in the comments below.