The simplest (yet possibly the most important) trends to start with were covered in our previous articles:

The articles mentioned above will make the following article easier to comprehend.

We will first look at the historical county General Election trends to identify potential issues, and then augment the analysis with “registration” data to derive a formula for calculating excess votes, in the next article.

This analysis is fairly simple and expands on the The Fall of the Bellwether Counties concepts; to turn the historical election results for any county, into a highly accurate predictor of election outcomes.

If we look more closely at what makes a “bellwether county” special, it is simply the fact that it consistently votes for the winning candidate at every election. The key is that it will vote for either party depending on the merits of each election. This means that after several elections we can derive two ranges of “winning percentages”. One for each party.

The results for a bellwether county (in this case Warren County, IL) will look like this:

The numbers surrounding the rectangles, represent the year of the election.

The X-Axis represents that “percentage vote” for the winning party at each election.

The results for each election are shown on the left hand side of the image.

Here is an animated example showing how the ranges are updated after each election:

💡 TIP:
A picture of the 10 best bellwether’s “winning ranges” can be found here.

If we were to take this concept to the extremes we would obtain the following scenarios. (Note, the size of the ranges are exaggerated to illustrate a point):

Needless to say that there are a multitude of different permutations, one of which could look like this:

💡 TIP:
This “Winning Range” is an important concept that gives us a lot of valuable information.

For example, if a county always votes Republican, it’s typical to see it vote less for the Republican candidate when a Democrat candidate wins the general election. And vice-versa.

So even though not all counties are technically “bellwether” counties, by carefully looking at their winning ranges and understanding where an election result is located within that range, we can determine if the outcome of an election makes sense or not.

In order to facilitate the analysis and compare counties with one another we will distill all this information into a single number. This number tells us where in the range of previous results did this specific election fall — did the party win a county by an average margin, a lower-than-average margin, or did they set a new winning margin record, and by how much? We’ll call it the “Location”. (The choice of this name will become clearer shortly.)

The different possible values are illustrated below:

► Learn how we calculate the "Location"

This is how the “Location” number is calculated.

Based on the balance of probabilities, we can assume that for any “typical” election, the winning party will be “located” close to the middle of the corresponding party range. (i.e. it should have a “Location” value that is close to 50%).

The “span” of the range (i.e. High - Low) also gives us an indication of the “volatility” of the voting patterns of the electorate. Smaller spans typically represent more predictable, stable, voting patterns.

Now that we have defined all the important terms the formula for calculating the “Location”, will depend on a few different scenarios:

In a sense, the Location value is “normalized” by the span and therefore makes it more meaningful to compare between counties.

There are still a few more steps to consider. Once the “Location” value has been calculated:

There are two corner cases we need to address: when a county votes for a party only once or twice within our dataset.

Let’s now look at the results for all the counties in Arkansas for all the elections since 2000. Arkansas is one of the cleanest states in the 2020 election, so it will give us a “baseline” against which to measure other states against. (It isn’t perfect, as we will soon see, but it is close.)

Concentrate on the Loc.20 column (the “Location” value for 2020 election), and pay attention to the trends.

In the following tables, you’ll see these columns. Here’s what they mean:

The counties are sorted from largest to smallest total votes (i.e. the most populated counties are at the top).

As you look at the data below, think critically, and ask yourself these questions:

Try and answer these questions for yourself before looking at the answers (which are given in the “Observations” section below).

(Two screenshots were needed to capture all the counties. Click an image to enlarge it.) 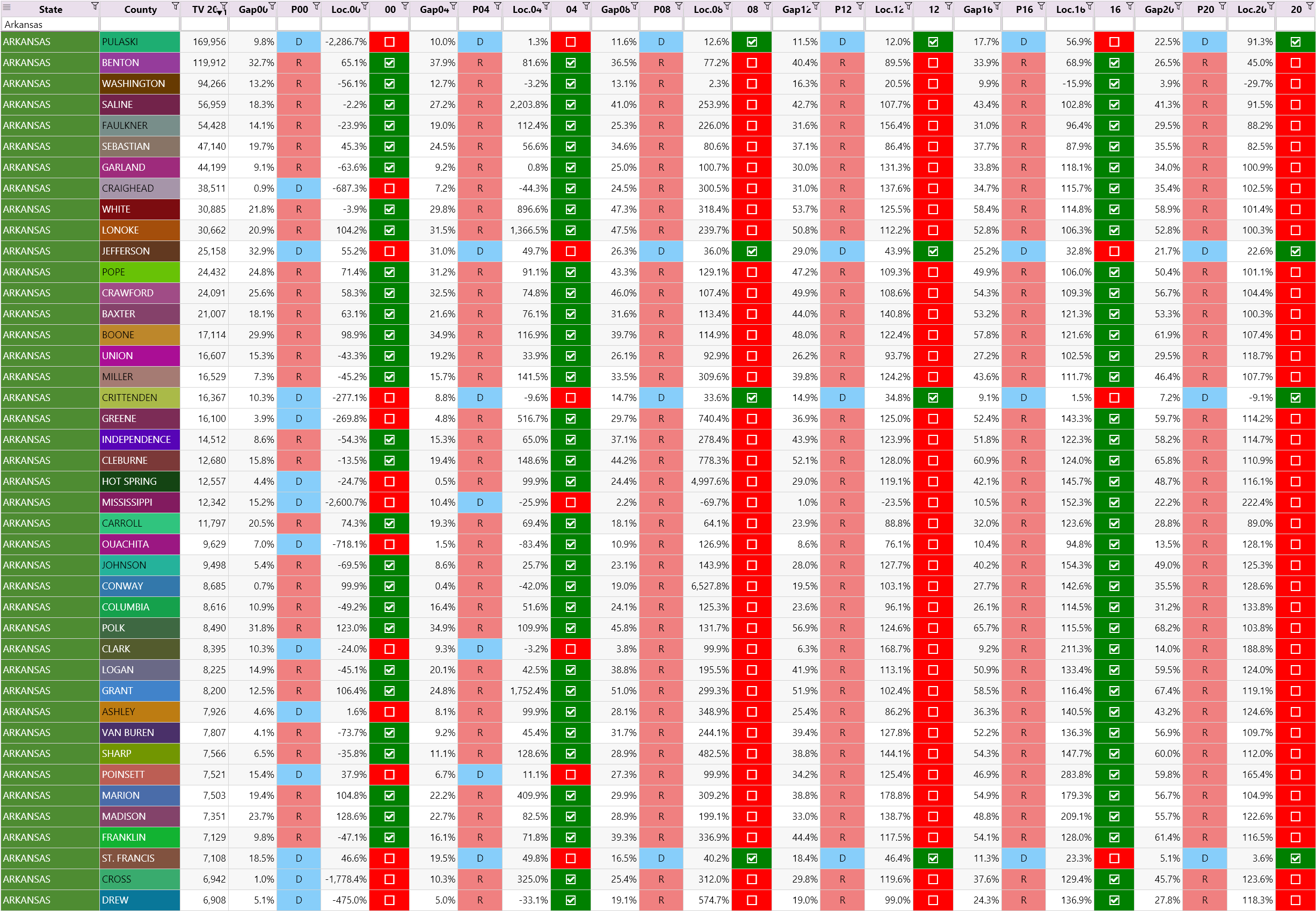 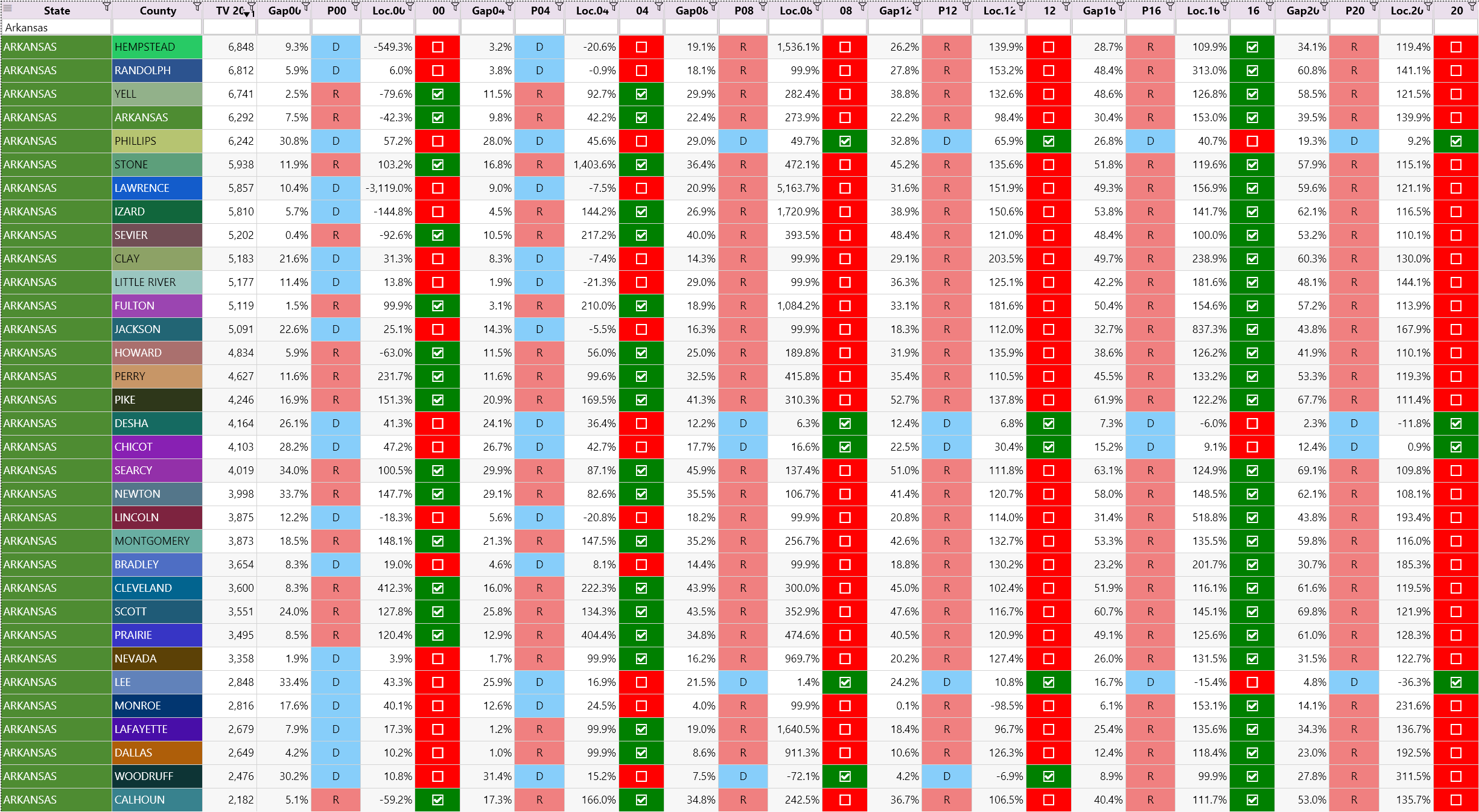 Here are the same images as before, but this time with a new “Movement” column. This represents the change in “Gap” value from the previous election to the current election. This column helps quantify the shift in sentiment between elections and is simply added as a reference to help people understand the usefulness of the “Location” column to quickly identify anomalies.

We recommend reading The Battle of the Largest Counties article first, if you haven’t already. It will provide the necessary background to assist you in finding meaningful trends.

So now let’s look at the counties with a total vote greater than 200K, sorted by descending order of their Loc.20 value (from highest to lowest). These are the large counties that set huge new winning margin records in the 2020 election.

Take some time to look at the data. Try and identify some trends on your own, before reading the observations. 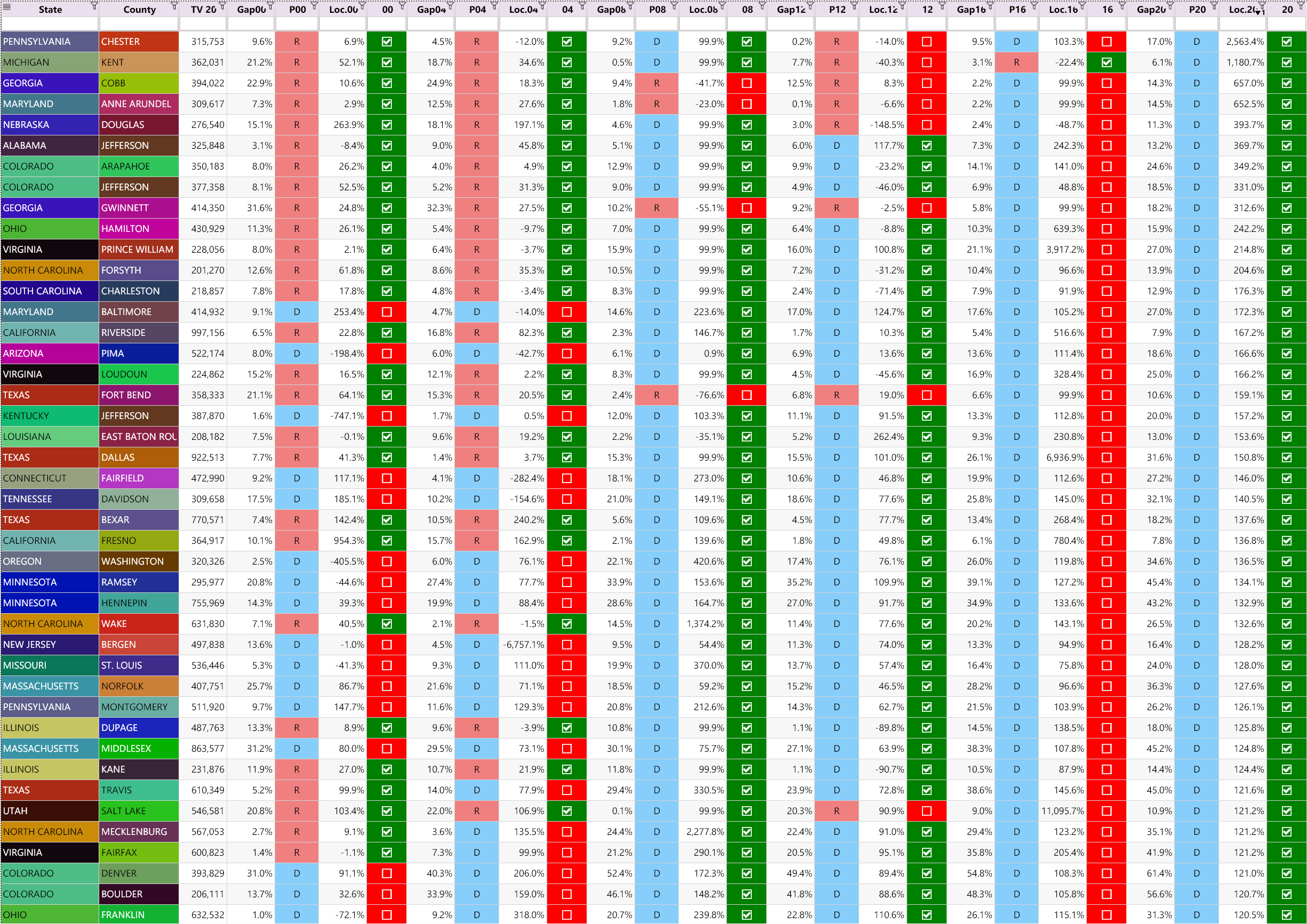 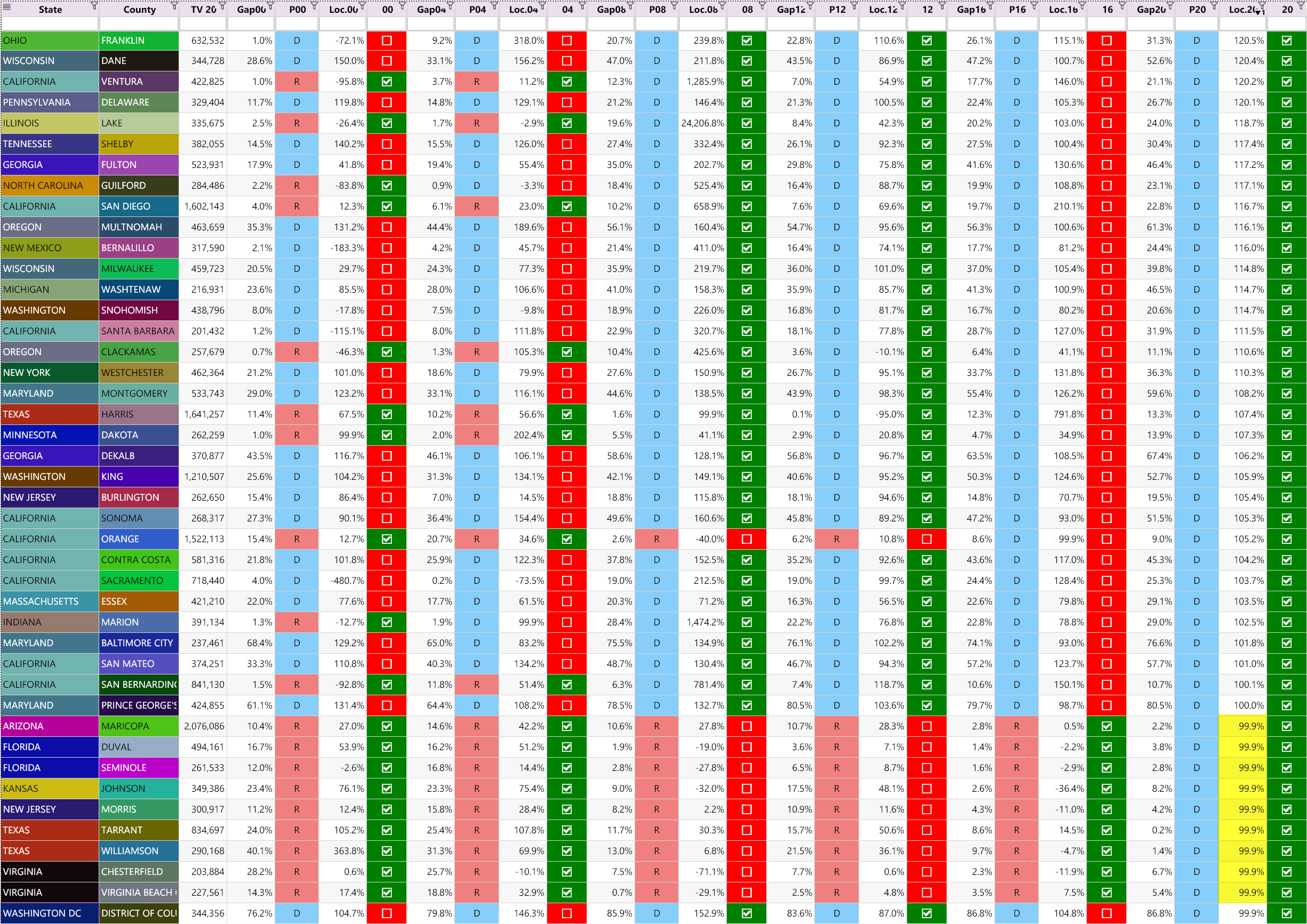 So what did you notice?

Here is what we observed:

Here is the list of all the most populated counties sorted by their total votes in 2020. You will notice the Republican counties are sparse, and their LOC.20 value is always less than 100%. We find this abnormal considering Trump had an extra 10+ million people vote for him in 2020. The highest of any incumbent President, ever.

What this means is that no Republican counties with over 200K votes increased their percentage lead from 2016 to 2020. It does not mean the total Republican votes did not increase. All of them did! It just means the total Democrat votes, in each of the large counties, increased more than the Republican votes (even within Republican strongholds!).

What makes this all the more confounding is that this trend only applies to populated counties. In smaller Democrat stronghold counties, with stable population growth, we observe large swings towards the Republican party.

Something does not add up.

How is California turning every state in the west more blue, blue, or purple, while doubling it’s own blue votes since 2000?

Let the one with wisdom understand.

Hopefully you’ve learnt a few new tools for analyzing election results by comparing the results with earlier years, and calculating a number that represents how the result compared to previous years.

This “Historical County Range Analysis” can provide compelling information about the historical trend for an individual county, as well as a state wide trend for how the counties voted for a particular party.

You should have already noticed a few intriguing statistics that deserve a closer look. In the following article we’ll dig deeper and incorporate voter registration data, which will allow us to derive a formula for estimating excess votes.