📃 This article is Part 8 in a series on Identifying Electoral Fraud Using Trend Analysis.

We discussed the z-score concept in Part 3: The Curious Case of the 2020 “Voting Rate” Blowouts.

The z-score gives us an indication of how far a value is from the mean, when measured in standard deviation units.

It allows us to normalize results across multiple datasets in order to compare them with one another.

💡 A Quick Refresher on Z-Scores:
A z-score of “0” would indicate the assessed value is equal to the mean of all the other values in the dataset.

A z-score of “2” would indicate the assessed value is 2 standard deviation units away from the mean.

When the values in a dataset follow a normal distribution, a z-score greater than 2.5 is rare.

If a dataset contained 100 values, we would only expect one value to have a z-score greater than 2.5.

We can calculate z-scores for all key parameters, discussed in the previous articles, which will allow us to compare the 2020 results with the previous 5 elections, to quickly identify the 2020 values that look unlikely.

The most important parameters are:

Not all states provide registration data, so we can’t calculate the T/DR for all states. However we can calculate the DVI for every state, so we will look at the zDVI score first.

We calculated the DVI for all counties in all states, and then determined the z-score for each DVI in 2020 (in the zDVI column). We then filtered the list to only display the counties with a DVI z-score greater than 2.5.

💡 TIP:
A z-score of 2.5 will put the value in the 99% percentile. In other words we should only expect to see such values once in every 100 elections.

A z-score greater than 3 is extremely unlikely. (Remember, in many data analysis scenarios these values are considered so rare that they are called “outliers” and removed from the dataset.)

There are over 388 counties across 37 states that have a zDVI score greater than 2.5! So we had to display the images on their own page:

Show Full List of zDVI Values Greater than 2.5, By State

🤯 For comparison, if we compare the 2016 election results with the previous 4 elections, we only get five counties with a zDVI greater than 2.5. In 2020, there was suddenly 388!

These are the states with the most counties with a zDVI score greater than 2.5:

A state that is notably missing is Pennsylvania… which makes one wonder how much worse the states in the list above are!

When we do have access to the registration data, we believe an “abnormal” T/DR value is the most powerful indicator of suspicious activity within a county.

There are over 331 counties across 17 states that have a zTDR score greater than 2.5, so again we had to display the images on their own page:

Show Full List of zTDR Values Greater than 2.5, By State

🤯 Again, for comparison, if we compare the 2016 election results with the previous four elections, we only get thirteen counties with a zTDR greater than 2.5. In 2020 it jumped to 331!

These are the states with the most counties with a zTDR score greater than 2.5:

Here are the 17 counties that have either their zDVI or zTDR value greater than 2.5 at the 2016 election: 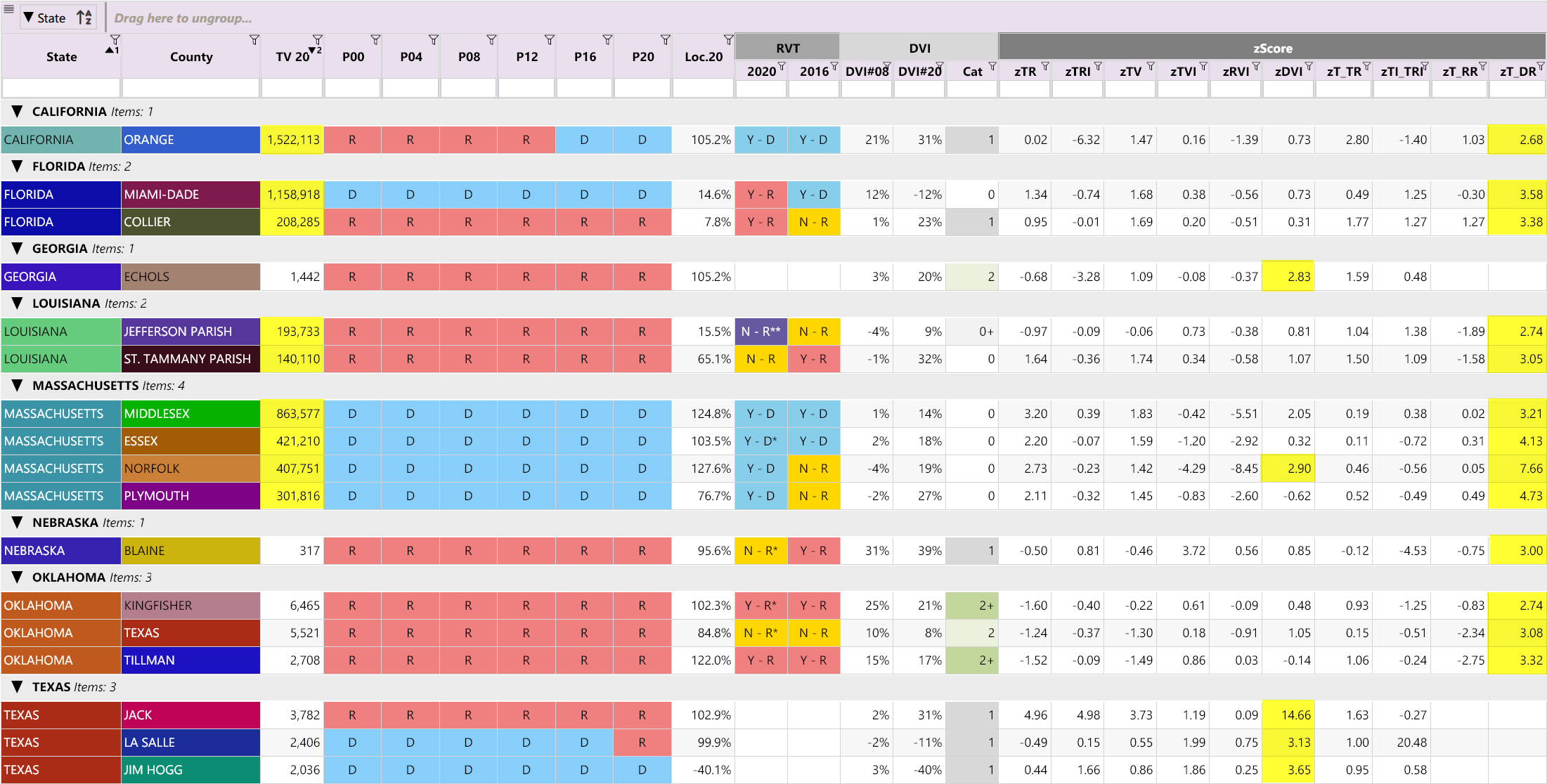 Here is the CSV file containing the complete analysis for ALL counties in ALL states.

You can use this CSV file to look at your county and compare it with other counties in your state.

Remember: any z-score, in any column, that is greater than 2.5 is suspicious and would warrant further investigation.

The table includes the following analyses:

The z-score is an impartial measurement for classifying values within a dataset.

During a normal election we would only expect to find a handful of counties with high z-score values, above 2.5, like in 2016. Here’s the comparison again:

We only focused on the DVI and T/DR values in this article, however other important parameters, such as RVI, TR, and TV, all display troubling z-score values as well.

The 2020 election had hundreds of counties with extremely high z-score values. The quantity and magnitude of the z-scores indicate the results are extremely unlikely.

These unlikely values are consistent with our other findings and point to the fact that more needs to be done to investigate the 2020 election.

The data speaks for itself.

At this stage of the analysis the evidence is overwhelming. We’d even venture to say that anyone refusing to take this seriously and allow independent audits of the election is either willfully blind or complicit. We call on all officials and state representatives to look openly and transparently at the results and allow the US public to verify that the election was run honestly and securely.

Stay tuned for our next article on Down Ballot Analysis, where we look at interesting statistical findings on how the Presidential race results compared to the other races in the same election.