Most research into election fraud began in the six battleground or swing states, yet after numerous other states reported integrity issues the research has widened. We’re hoping to expand our coverage to every state in the US. The sections below outline what we know so far about Virginia.

The Heritage Foundation’s Election Integrity Scorecard is an assessment of each state’s voting laws, written regulations and procedures. Virginia was ranked 16th out of 51.

View the full Scorecard for Virginia

Seth estimates that there may be approximately 217,000 votes for Biden in excess of what Virginia registration trends would indicate — a possible indicator of fraud. Counties with the greatest number of excess votes deserve closer inspection.

Seth has listed Virginia’s Chesterfield, Loudoun, and Spotsylvania counties as being among the Nation’s Top 100 Worst Counties in terms of abnormal trends during the 2020 election.

Virginia used Dominion Voting Machines in at least some counties. Numerous integrity issues have been uncovered with Dominion.

The graph of ballot counting for the election exhibits some highly strange activity: 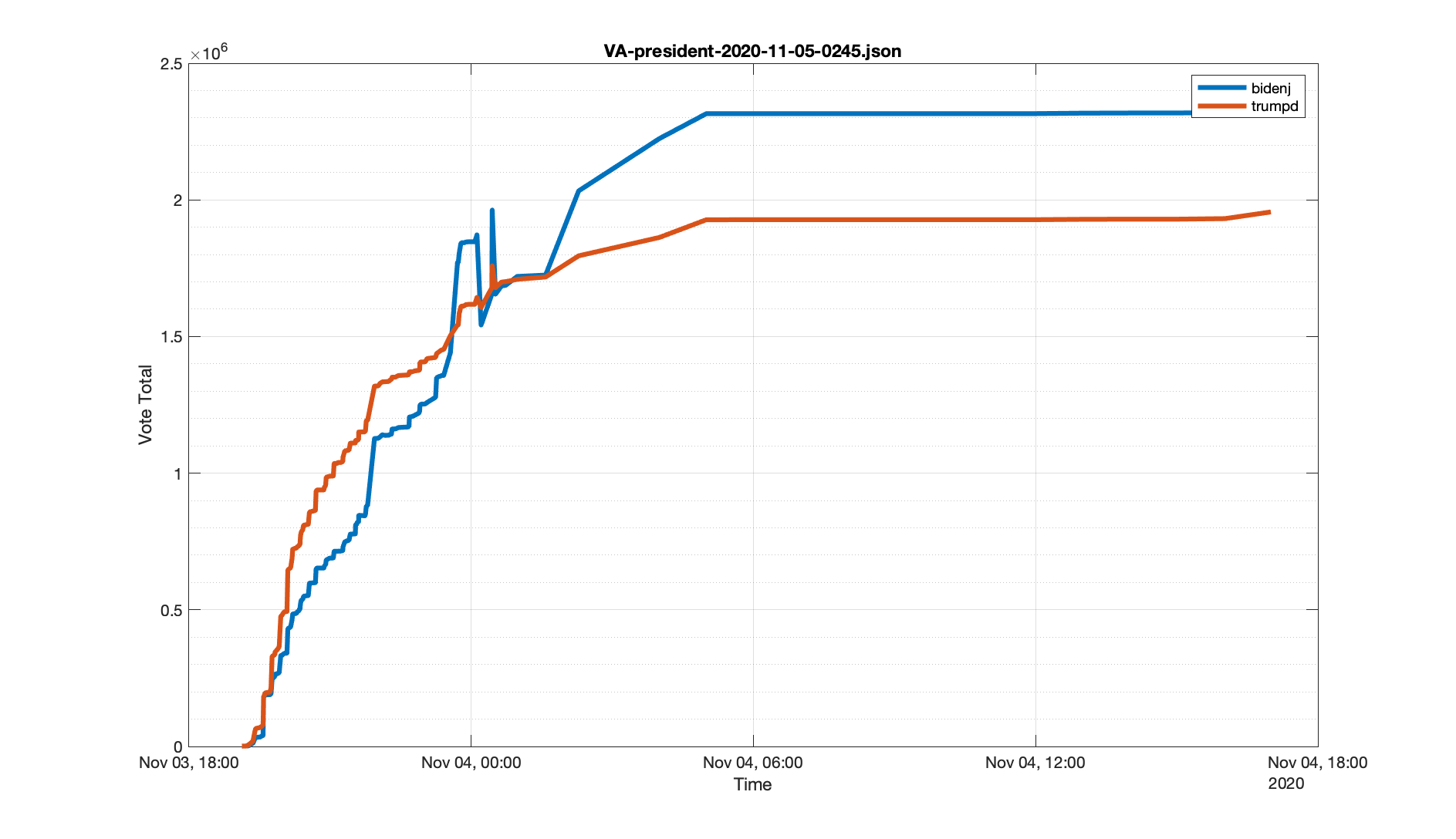 Source: wwrkds.net: A Midnight Spike in VA, and generation of Election Fingerprints over time

It shows Biden initially losing the in the state, but after some uncharacteristically steep increases, he overtakes Trump, followed by votes getting removed and readded twice (why were votes being removed from the counts?), resulting in a huge lead over Trump. This activity appears highly questionable and deserves further investigation.

Multiple reports 3 4 5 6 7 8 accuse charities supported by Facebook CEO Mark Zuckerberg and his wife of illegally influencing the 2020 presidential election in multiple states, including Virginia. Through their donations of $400 million into charities like The Center for Tech and Civic Life (CTCL), millions poured into the key swing states of Michigan 9, Pennsylvania, Arizona, Wisconsin, Georgia, Nevada, as well as Texas, North Carolina, and Virginia, in violation of federal law. 6

Here are the 10 largest CTCL grants in Virginia and who won each county in 2020: 4

In our series of articles on election trend analysis, we identified the following statistical outliers for Virginia which deserve further investigation. Visit the linked articles to learn more.

Anomalies continued during the November 2021 election in Virginia. Here’s one eyewitness testimony:

My wife and I went for early voting in Virginia today, and something very disturbing happened.

During the time we were there and engaged in this dispute, a matter of about fifteen minutes, I overheard three other people going through exactly the same thing.

We live in a heavily Democrat-controlled precinct in a Democrat-controlled state in which the Republican candidate for governor is running even with the Democrat candidate. A not-inconsiderable number of people in just one precinct during a very brief period of time were complaining that the voter rolls showed they had requested and received absentee ballots they did not request or receive.”

❌ No representatives from Virginia have yet signed the document.

The US Congress Election Integrity Caucus — a group of 55 federal members working together on issues of election integrity — has no members from Virginia.

To join the grassroots efforts in pursuing election integrity and audits of the 2020 election in Virginia, you can join the following groups on Telegram:

We aim to publish links to both the raw election data and voter registration data for Virginia so that citizens and researchers can analyze this information for themselves.

Beyond Virginia, additional links of nationwide relevance are available on our Further Leads page.

Do you have more information about what happened in Virginia? Share in the comments below.