On Sep 24, 2021, the Arizona Senate heard presentations from the key auditors, presenting their findings.

The official written reports can be obtained from The Arizona State Senate Republican Caucus, or we’ve included direct links below.

We recommend checking The Arizona State Senate Republican Caucus website for the latest versions, in case they release further reports or updates that we have not listed here.

Here is a summary table from the Cyber Ninjas report (Volume III). This does not include the 17,322 duplicate ballots found by Dr. Shiva (EchoMail) and the 255,326 early votes that appear in the VM55 but are missing from EV33 file. 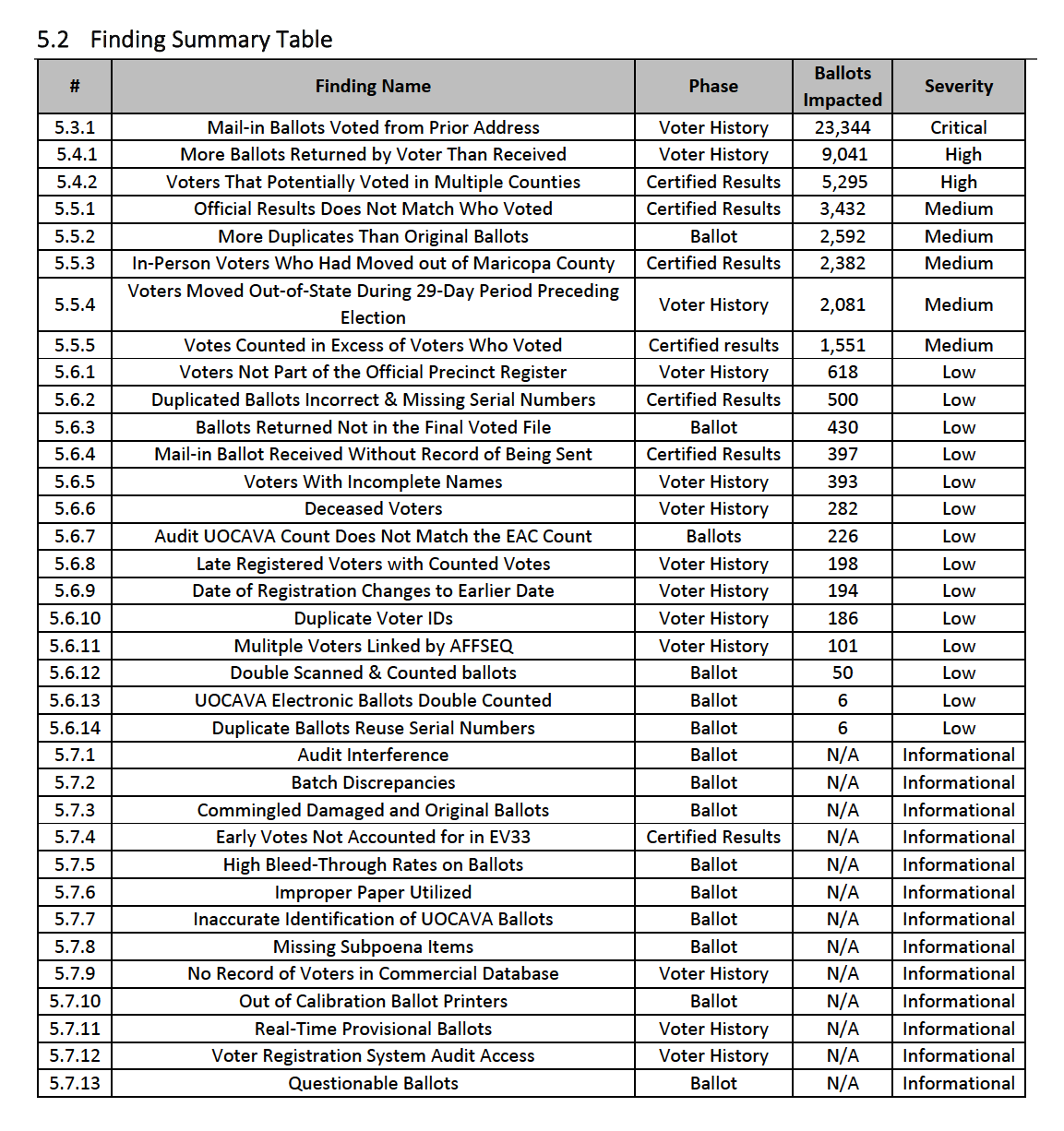 A lot of the mainstream media has picked up on a single results table from Doug Logan that showed that the audit team’s count of the ballots closely matched the certified results, using that as supposed proof that Biden still won the state. What is being overlooked is the highly questionable validity of those votes.

Also note that this is not the complete audit report. Analysis of the routers, Splunk logs, and paper ballots is still ongoing.

Thanks to @LibertyOverwatchChannel for sifting through the reports and providing summaries. A further summary, with slightly more detail is on Patrick Byrne’s website.

Below, you can watch the full 3-hour hearing:

Editor’s note: Regarding the machine-printed ballots mentioned in the video above, Doug Logan, the lead auditor from Cyber Ninjas reported that there are some legitimate scenarios where ballots are marked by a machine, such as if they are damaged, or unable to be scanned 6, or from ballot marking devices (BMDs) used by voters who are unable or uncomfortable marking a ballot by hand. While BMDs may be needed for voters with disabilities, they have known issues when used in large populations.

Analysis of the routers, Splunk logs, and paper ballots is still ongoing. We’ll update this page as more findings are uncovered.

Maricopa County officials took to Twitter and sympathetic media channels to deny the allegations and minimize the report’s findings. They claimed the results were mistaken and that they had provided everything in the Senate’s subpoena, despite several key items still being withheld.

Members of the Maricopa County Board of Supervisors, as well as Ken Bennett, Senate liason for the audit, presented testimony to Federal Congress’ Oversight Committee on the findings, during which the county admitted to removing election files from machines prior to the audit. 7

Dr. Shiva, who ran the audit of ballot envelopes, held a follow-up open discussion forum on the Maricopa Audit, open to Republicans, Democrats and state/county officials. See the full video and our summary here.

Cyber Ninjas later provided a great, detailed rebuttal to Maricopa County on their denials and deflections. It addresses specific claims, one-by-one, with screenshot evidence and links to further references.

So What Happens Now?

Senator Karen Fann has forwarded all reports onto Attorney General Mark Brnovich, who is in the process of identifying criminal activity and other breaches of law that need to be prosecuted.

The state congress will also likely explore further actions such as potentially decertifying the results. We expect to hear more about this in the coming days and weeks. 8